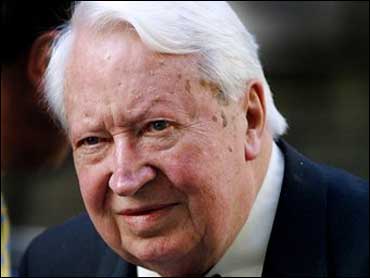 Sir Edward Heath, a former British prime minister defeated in government by pay strikes and in opposition by Margaret Thatcher in 1970s, died Sunday, a spokesman said. He was 89.

A carpenter's son who broke the tradition of blue bloods leading the British Conservative Party, he was a born politician whose major achievement was to negotiate Britain's 1973 entry into the European Community. The entry overturned years of resistance both domestically and by France, which had vetoed Britain's entry in 1967.

In 1992, he became Sir Edward, a member of the country's most prestigious order of chivalry, the knights of the Garter.

"He was a man of great integrity and beliefs he held firmly from which he never wavered, and he will be remembered by all who knew him as a political leader of great stature and importance," Prime Minister Tony Blair said Sunday.

Heath came to power in 1970 pledging to end Britain's long cycle of post-World War II decline, but he was thwarted and, in the end, brought down by militant unions.

In 1974, with Britain reduced to a three-day week by striking coal miners, Heath called an election demanding "who governs?" in a challenge to the unions. He lost to Harold Wilson's Labor Party and lost again when Wilson called an election in October that year.

In all, Heath had taken the party to defeat by Labor three times since becoming leader of the party in 1965.

The Tories rebelled and in February 1975 another outsider, the grocer's daughter Margaret Thatcher, successfully challenged him for the party leadership.

He remained in the House of Commons as a rank-and file legislator, a bulky, unforgiving figure sniping ineffectively at his right-wing successor.

"This rather shy, rather withdrawn man, felt deeply affronted," said William Whitelaw, who also tried for the leadership in 1975 and then became Thatcher's loyal deputy.

"Certainly he would mind more than most people who had been beaten by a woman," said Whitelaw. He added that Heath, who never married, had no wife to say, "What's the good of feeling so bitter about it?"

During Thatcher's 15 years as party leader, Heath's name disappeared from the Conservatives' official folklore. The 1987 election manifesto, for example, described the history of Conservative policy toward Europe without mentioning Heath.

Edward Richard George Heath was born in Broadstairs, a harbor town in the southeast England county of Kent, on July 9, 1916, the elder of two sons.

Encouraged by his mother, Heath began piano lessons as a small boy. It became a lifetime interest.

From his state school, Heath won a scholarship to Oxford University. Like Mrs. Thatcher, he emerged from Oxford with an upper-class accent. After World War II service as an artillery officer, Heath worked briefly as a civil servant and then as an editor of the Anglican Church Times.

He was elected to the House of Commons for Bexley and Sidcup in 1950, and represented the solidly Conservative south England district through his long political career. To the end, Heath remained an unusual politician in that he never tried to be liked.

Awkward silences would fall during interviews with journalists. In the Thatcher era, he would often sit staring glumly ahead during party conventions.

Both as prime minister and leader of the opposition he conducted symphony orchestras. He had two Steinway pianos in his house, Arundells, in the south England cathedral city of Salisbury, and another in his apartment in London's Belgravia district.

His 1976 book, "Music, a Joy for Life," was a best seller. So was one he wrote on yachting after taking his yacht Morning Cloud to victory in Australia in the Hobart-Sydney race.

Stripped of power, he was sensitive to suggestions that his life was lonely or empty.

"I enjoy my own company," he said, looking back in a 1989 newspaper interview, "I don't think I ever regret not getting married. A lot of politicians seem to regret they've got wives."