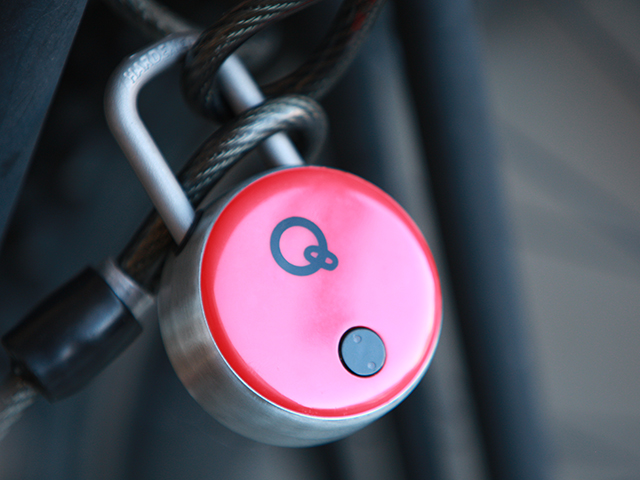 The smartphone is becoming a personal command center. Since it's always within arm's reach, more and more products and services rely on your iPhone or Android. "Smart" door locks leverage your phone to let you leave your house keys behind. Home security systems and motion-sensitive cameras avoid monthly fees and send notifications directly to your phone.

And now there's QuickLock, a Bluetooth-powered padlock that updates the classic portable lock for the smartphone age.

QuickLock doesn't use a key or combination of any kind. Instead, it unlocks using either an app on your phone or a key based on "near field communication," a mobile technology that enables wireless transactions. The lock itself looks like an ordinary padlock, except for the lack of a keyhole or spinning dial. The only disturbance in the lock's smooth front face, in fact, is a small button. Press it to wake up the lock and launch your iPhone or Android app. After a few moments, the lock disengages.

If you prefer to use the NFC key, which you can slide into your wallet or place in a credit card pouch in your smartphone case, the process is similar. Press the button and wave the NFC key in front of the padlock to unlock it.

The first question you might have about QuickLock is about battery life: Is this something you need to charge periodically, and will it die one morning when you're trying to open a gym locker after a pre-work workout? Thankfully, QuickLock relies on a rechargeable lithium ion battery that's good for about two years on a charge. It's also waterproof and seemingly as rugged as any traditional padlock.

Keep in mind that what you're buying with QuickLock isn't greater security. Any padlock's greatest weakness is its shackle, and a determined thief will simply slice through the QuickLock's shackle with a pair of bolt cutters.

What QuickLock offers is convenience. It has no key to carry or lose, and no combo to misplace or forget. (At one time, I had a drawer in the garage filled with padlocks for which I'd lost the key or combination.) It also unlocks, as its name implies, quickly. QuickLock disengages about four seconds after pressing the button.

If you would rather use an NFC key, a QuickLock can recognize up to about 50 keys, so you can share the lock with multiple people without also trading the NFC key. Just as convenient, multiple QuickLocks can be trained to recognize the same NFC key. The NFC option is a good one, since that makes the QuickLock practical for people who don't carry smartphones, like young children. Indeed, there are NFC accessories like rings and key fobs that put the QuickLock "key" within easy reach.

I reviewed a pre-production version of the QuickLock and found it impressively polished and effective. It never failed to unlock promptly, and the mechanics are smooth and secure. It's an example of a product that is designed to do one thing, and it does that one thing simply, easily and effectively.

QuickLock is gearing up for full production and is expected to ship before the end of April. You can order one for $79 at the QuickLock site.