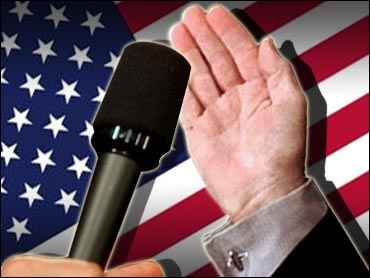 When freelance journalist Elena Lappin boarded United Airlines flight 935 from London to Los Angeles International Airport, she envisioned exploring the City of Angels and succumbing to its laid-back charm.

Instead, the most Lappin saw of the city on her truncated trip in May were glimpses of nighttime urban Los Angeles through the metal bars of a security van.

Detained upon arrival by immigration officials, then clapped in handcuffs, the British national was told she would have to be deported. Her crime: entering the country to research a story without a special press visa she didn't know she needed.

The 49-year-old reporter on assignment for London's Guardian newspaper was transported to a downtown detention facility and locked in a cell behind a thick glass wall. There was no bed, no chair, just two steel benches and a toilet in full view of passers-by. She spent 26 hours in detention before being shipped back to Britain.

"I felt angry, helpless, humiliated," she said in an e-mail interview with The Associated Press.

Lappin's case is not isolated. Over the last year and a half, at least 18 journalists from countries the U.S. government considers friendly have been seized at U.S. airports and forcibly deported.

While immigration policy was recently modified in response to outcry over the deportations, media advocacy groups say more action is needed, and one group has even called for congressional intervention.

Adding urgency to the matter is the expected influx of foreign journalists in coming weeks for coverage of the political conventions and presidential election.

"This is a pivotal time, and more has to be done to ensure immigration officials know what the policies are," said Tala Dowlatshahi, U.S. representative of Reporters Without Borders.

"Handcuffing and locking foreign correspondents in a cell for not having a visa is not only outrageous, it goes against the ideals of a free and open society," she said.

Only countries like Saudi Arabia, Iran, Vietnam, North Korea and Cuba require special visas for journalists, according to Reporters Without Borders.

At issue is a regulation requiring journalists from 27 "friendly" nations to obtain special visas, called I-visas, while citizens of those same countries can enter America without a visa for up to 90 days. Most citizens of other countries must apply for a visa regardless of the purpose of their visit to the United States.

The American Society of Newspaper Editors protested the rule as discriminatory in a recent letter to Secretary of State Colin Powell and Homeland Security Secretary Tom Ridge.

But Department of Homeland Security spokesman Bill Strassberger says the I-visa is nothing new, dating back to 1952, although he acknowledges enforcement has been more vigilant since the Sept. 11 attacks.

And therein lies the problem, media groups say. Revival of the I-visa requirement has not been properly publicized and numerous reporters are being caught unaware, with at least 15 journalists being deported at LAX, Los Angeles' main airport, alone since March 2003.

While Strassberger conceded that LAX appears to be a major pinch point, he cited statistics showing that the expelled journalists comprise only a small percentage of the total number of deportations at the airport.

Nonetheless, press advocacy groups worry that any curtailing of foreign press access as part of America's war on terrorism could eventually lead to retaliatory curbing of U.S. media access abroad.

"The clampdown on journalistic freedoms is frightening," Dowlatshahi said. "Who knows when other countries will follow suit."

Following a barrage of letters protesting the reporters' treatment, U.S. Customs and Border Protection Commissioner Robert Bonner announced a slight change in policy in late May.

Port directors were given authority to allow foreign reporters without the correct visa to enter the country anyway on a one-time basis. Subsequently, however, they would need the right paperwork.

"We realize there is a difference between fraud and failure to be informed," Bonner said in a statement. "That is why we are giving our port directors leeway."

But some — like French reporter Alexandre Alfonsi — worry that such local discretion could make the process even more erratic than he says it already is.

He was refused entry for not having a journalist visa. But the colleagues — who didn't have the visa either — were initially waved through. Only when they asked about their friend were they also nabbed.

"It was so arbitrary," Alfonsi said in a telephone interview. "I had everything I needed to prove I was a journalist, so I thought they would let me go to the consulate to get the visa, but they refused."

Twenty-five hours later, after being fingerprinted, photographed, and bused to a detention center, all three journalists were sent home.

"We were marched across the airport in handcuffs like we were criminals," Alfonsi said.

Ana Hinojosa, director of Customs and Border Protection at LAX, said this is standard procedure.

"(It) is not for humiliation or criminality, but for the safety of the officer and the other passengers," Hinojosa said.

ASNE Executive Director Scott Bosley said that while the recent easing of policy is a step in the right direction, it doesn't go far enough.

"Foreign journalists from friendly nations ought to have the same right as all other citizens who can travel here," Bosley said. "It doesn't make sense that they are excluded."
By Andrea Almond