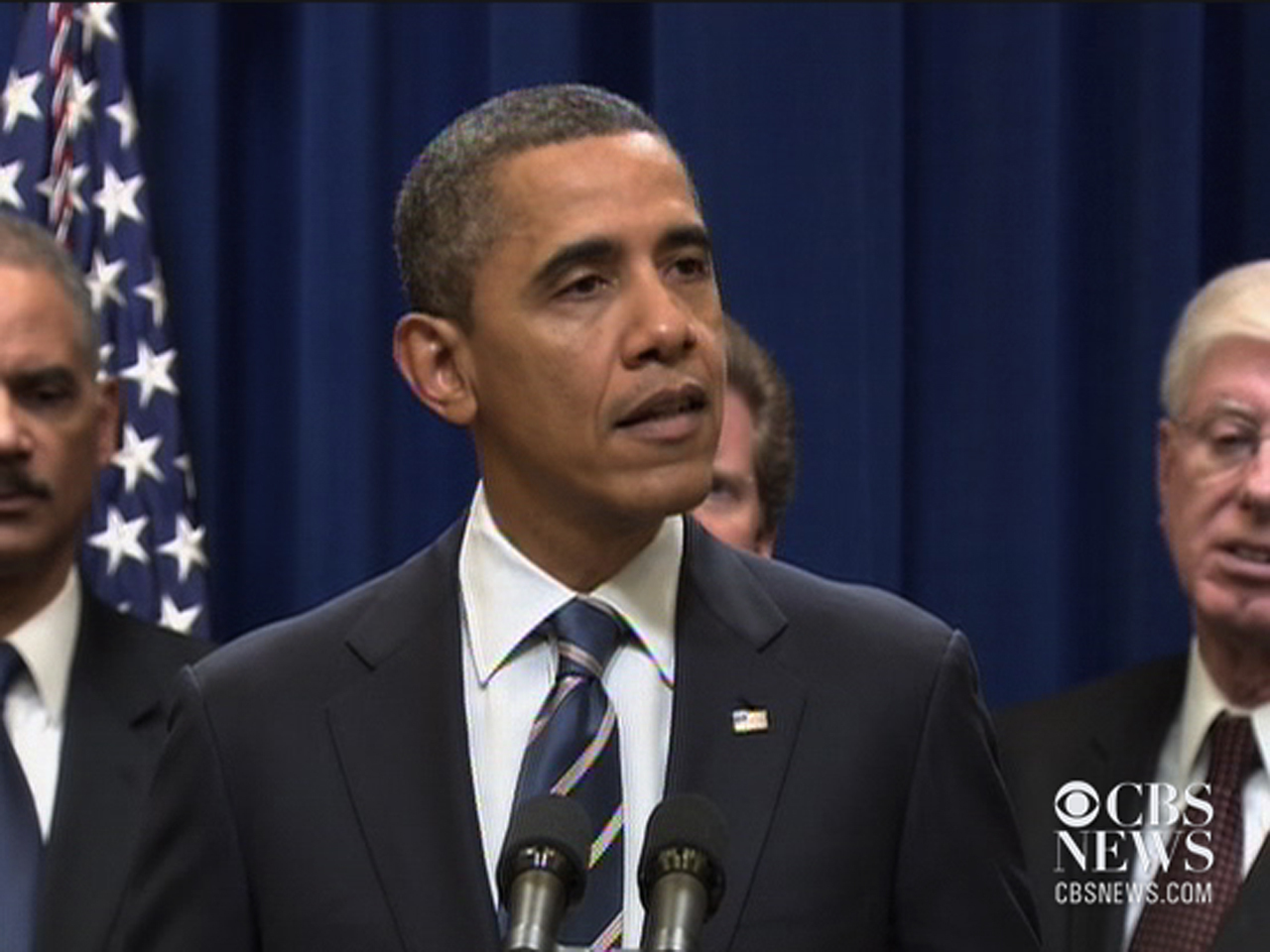 President Obama is hailing the $26 billion foreclosure settlement as the beginning of a new era for the U.S. mortgage industry. He also minced no words in calling big banks' foreclosure practices "plainly irresponsible."

"We have reached a landmark settlement with the nation's largest banks that will speed relief to the hardest hit homeowners, end some of the most abusive practices of the mortgage industry, and begin to turn the page on an era of recklessness that has left so much damage in its wake," he said Thursday after the pact was announced.

The deal, which has been in the works for at least 16 months, is the largest joint federal-state settlement in the nation's history. "It holds mortgage servicer companies accountable for abusive practices and requires them to commit more than $20 billion towards financial relief for consumers," said U.S. Attorney General Eric Holder. "As a result, struggling homeowners throughout the country will benefit from reduced principals and refinancing of their loans. The agreement also requires substantial changes in how servicers do business, which will ensure the abuses of the past are not repeated."

Nationwide foreclosure pact gains momentum
$25B foreclosure deal: What it could mean for homeowners

On CBS This Morning: $26B mortgage deal: Who gets the money?

The settlement, which is about $1 billion bigger than had been expected, is certainly significant. The banks joining the deal -- Ally Financial, Bank of America (BAC), Citigroup (C), JPMorgan Chase (JPM), and Wells Fargo (WFC) -- are the biggest mortgage lenders in the country. Requiring these financial giants to improve their loan-servicing practices could spur reform in an industry that is long overdue for change.

But when the agreement is measured against the devastation the housing crisis has wrought on Main Street and on the broader economy, it's not enough. Big banks are charged with deceptive practices that range from "robo-signing" to filing falsified foreclosure documents, and while they made a fortune (at least for a while), many homeowners have lost everything.

Wade Henderson, head of The Leadership Conference on Civil and Human Rights, a Washington advocacy group, acknowledged that the financial relief earmarked for homeowners under the deal is insufficient. But he said in a statement that the settlement represents progress:

To be clear, $26 billion doesn't even come close to matching the monetary value of the damage perpetrated against our communities, but it is a significant step on a long path for advancing justice for these homeowners.... You cannot put a dollar value on the suffering of these families, but we can seek progress. And today's settlement is a step in the right direction.

Yet while the agreement will help some homeowners who owe more than their houses are worth, for many the funds are likely to be inadequate. Under the settlement, homeowners who are currently underwater may see their loan principal reduced by an average of $20,000. But that won't be enough for people who own a home that is worth half of what they paid for it five years ago.

Still, some observers think the deal could serve as a catalyst for further mortgage industry reform. California Labor Federation Executive Secretary-Treasurer Art Pulaski believes the settlement is the first in a number of steps to repair the housing market and the economy. He said in a statement:

Today's settlement offers real progress: $26 billion in relief, with $18 billion coming to California families; a new task-force on mortgage fraud; some important reforms to protect borrowers; and we've preserved the right to go after the banks for their deceptive practices.

There is no doubt that the settlement amount pales in comparison to the $750 billion in lost home values. California's unions will continue to work with [Attorney General Kamala] Harris to fight for homeowners and hold the banks accountable.

Whether the arrangement ultimately succeeds remains to be seen, but some big lenders already are moving to implement the settlement's refinancing requirements. Starting in March, Wells Fargo will provide borrowers with $900 million in refinancing relief and $3.4 billion in principal-reduction and short-sale programs, according to HousingWire.

Mike Heid, president of Wells Fargo Home Mortgage, said in a statement that "Today's agreement represents a very important step toward restoring confidence in mortgage servicing and stability in the housing market."

The new loan-servicing standards stipulated in the settlement provide for stricter oversight of the foreclosure process, and foreclosure should now be considered a last resort. Yet some homeowners will still unnecessarily lose their houses. It's also unclear how the agreement affects homes that are in the process of being foreclosed.

For more information about the settlement, go to www.NationalMortgageSettlement.com. To find your state attorney general's website, go to www.NAAG.org and click on "The Attorneys General."

If you're a homeowner and have questions about whether you qualify for a loan modification or refinancing under the Home Affordable Refinance Program (also known as HARP 2.0), contact the Homeowner's HOPE hotline at 1-888-995-HOPE or go to MakingHomeAffordable.gov.