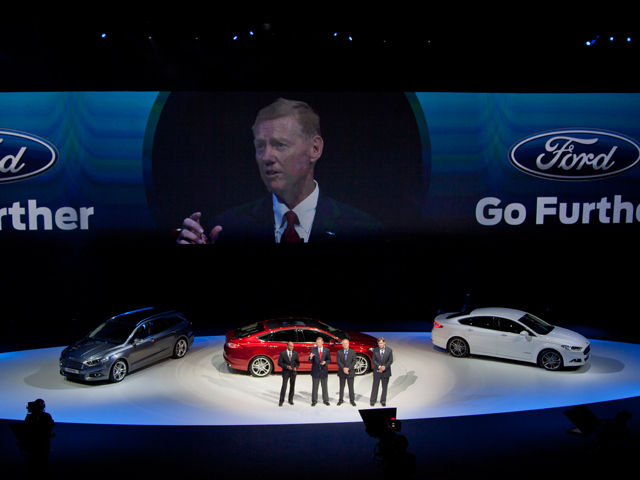 (AP) NEW YORK - Ford Motor Co. (F) on Thursday unveiled 15 new or restyled vehicles for the European market that it will launch over five years to revive slumping sales.

While other carmakers are holding back on new car launches due to tanking European demand, Ford executives announced that the Detroit carmaker will accelerate new car launches in Europe, expanding its lineup of SUVs, restyling the hot-selling Fiesta, redesigning its commercial vehicles and bringing the iconic Mustang sports across the Atlantic.

Consumer demand for cars in Europe has plummeted as the sovereign debt crisis has spread to the real economy, cutting economic production and forcing up unemployment in the region. Vehicle sales in the European Union dropped 6.8 percent in the first six months of the year to 6.64 million, from 7.1 million in the same period a year earlier - raising concerns about factory overcapacity across the continent.

But Odell said Ford wants "to demonstrate that despite the economic crisis, we are investing in the future. ... We want to make a statement loud and clear that we believe there is great opportunity in Europe."

Ford forecasts that car sales in Europe, including Russia, will increase by 20 percent in the next five years to 23 million vehicles.

Many of the new vehicles announced at a gathering of Ford dealers in Amsterdam, broadcast live on the Internet, are either restyled versions of existing vehicles or European launches of vehicles available in other world markets, as the car company accelerates its global model strategy devised six years ago to confront the economic crisis in North America.

"In 2017, our European showrooms will feature 15 truly global vehicles," Mulally said, bringing to 71 percent the share of global models in Europe, compared with 43 percent currently.

Aaron Bragman, an automotive industry analyst at IHS Automotive, said the strategy worked in helping Ford get through the crisis in the United States.

"They gave us half the equation," Bragman said. "The other half that wasn't discussed was what kind of changes are going to happen at Ford of Europe internally to bring their costs under control."

That could include looking at the manufacturing footprint, engineering and staffing. "That will be a much harder look and it won't be as fun to talk about as new products," Bragman said.

The refreshed lineup includes a second-generation Kuga midsize SUV to be launched this year, as well as a new Ecosport compact SUV and the European launch of the larger Edge. The new Fiesta small car features a sharper exterior design and will be available with technology aimed at parents of young drivers that sets maximum vehicle speed or volume for in-car audio.

Ford is targeting the lucrative midsize car market with a restyled Mondeo, incorporating the carmaker's new inverted trapezoidal grill. The Mondeo will be available in four-door, five-door, wagon and a four-door gas hybrid electric version, Ford's first full hybrid car for Europe. After shrinking over the last decade, the midsize market has stabilized and Ford is forecasting growth of 15 percent by 2015.

Many of the vehicles will be offered with Ford's 1.0 liter EcoBoost engine that increases performance while achieving greater fuel efficiency.