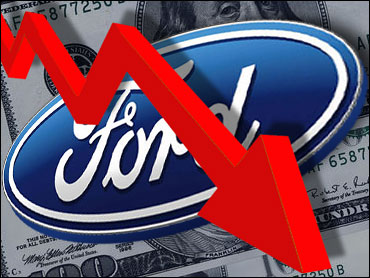 Ford Motor Co. lost $5.8 billion in the fourth quarter amid slumping sales and huge restructuring costs, pushing the automaker's deficit for the year to $12.7 billion, the largest in its 103-year history.

It was far from the largest quarterly or annual corporate loss on record — Time Warner Inc. reported a $97.2 billion loss in 2002, largely due to new accounting rules about how to value assets. Ford could not rely on accounting rules, however, to explain its staggering total, which represented a loss of $4,380 on each car or truck it sold in 2006.

Dearborn-based Ford predicted more losses for this year and in 2008, but said its restructuring plan is on track to return to profitability in 2009.

"We know where we are. We are dealing with it and we're on plan," Chief Executive Officer Alan Mulally told reporters and industry analysts in a conference call.

The company, which lost $6 billion on North American operations alone, said it expects to burn up $10 billion in cash to run its business through 2009 and spend another $7 billion to invest in new products.

The fourth-quarter loss was the worst final-quarter loss in Ford's history and its second-worst quarterly performance. Ford lost $6.7 billion in the first quarter of 1992, due mainly to accounting rule changes on health care liabilities.

Ford, faced with increasing competition from overseas rivals such as Toyota Motor Corp., is banking on the restructuring to pull it through the next two years. Mulally, hired from aerospace giant Boeing Co., is leading the drastic efforts to turn around the company.

Ford mortgaged its assets to borrow up to $23.4 billion to pay for the restructuring and to cover losses expected until 2009. About 38,000 hourly workers have signed up for buyout or early retirement offers, and Ford plans to cut its white-collar work force by 14,000 with buyouts and early retirements.

In all, Ford laid off nearly half of its hourly workforce, reports CBS News correspondent Anthony Mason.

"I haven't really thought about that last stroll out the door," said Steve Bral, who accepted the company's buyout offer. "That's going to be very difficult after 18 years."

Bral's father and grandfather also worked for Ford. "There's a lot of anxiety about what's life gonna be like when we move to a new state, a new job, basically a new beginning."

Chief Financial Officer Don Leclair said Ford expects favorable results from its automotive business in 2007. But because of interest on its debt "total automotive results are expected to be worse in 2007 than in 2006," he said.

Leclair said the company finished 2006 with $33.9 billion in cash available for its automotive operations, including $12 billion that it borrowed in December. He said the company could tap into nearly all of that cash to fund its operations.

The company is on target, though, to achieve its goal of cutting $5 billion in annual costs by 2008 compared with 2005 levels, Leclair said.

Mulally said Ford will continue to review its costs, looking for more cuts as it gains efficiencies from building more cars worldwide on fewer frames in more efficient factories.

"The more I review the details, the more confident I am that we can continue that cost reduction through 2009 and beyond," he said.

Ford, which relied on truck and sport utility vehicle sales for much of its profits, was hurt last year as $3 per gallon gasoline sent consumers fleeing to smaller, more fuel-efficient vehicles. Ford has seen its market share deteriorate in recent years. At the same time, Toyota has seen its U.S. sales rise, moving past Ford into the No. 2 sales spot in July and November.

Ford has rolled out or will introduce several new or updated products during 2007, including the Edge crossover, new F-series Super Duty pickups, a redesigned Focus small car and an updated Five Hundred larger sedan.

But many analysts are skeptical that the products are strong enough to turn the company around.

McElroy, though, said it is unlikely Ford would take part in any major mergers or buyouts.

Mulally said earlier this month that Ford's restructuring plan remained "absolutely the right thing to do."

Ford said that special items associated with restructuring costs totaled $9.9 billion for the year as the company continues efforts to shrink itself to match reduced demand for its cars and trucks.