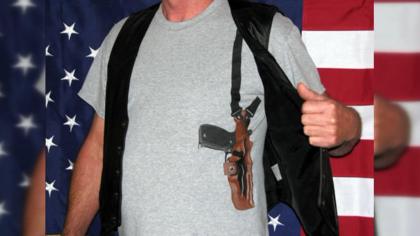 Inside Nitelife Billiards in Grand Junction is something owner Paul Liebe calls a great conversation starter.

"Freedom of speech, it's your right, and it just has a little kick on the side," Liebe said.

Among the cue balls and pool sticks are open carry custom shirts sporting a realistic gun in holster and shoulder strap that make it appear the person wearing it is carrying openly.

Liebe says the shirts started as friendly gifts around town, but soon orders started coming in from all over the country. Now they have gone global with boxes of orders stacking up.

"We've got requests from Italy, we have shipped them to soldiers in Afghanistan," Liebe said.

Leibe believes strongly in the Second Amendment and open carry, but he also believes in staying safe.

"Don't put your hand on the shirt on the gun," he said.

Which is why he includes a strong warning message with every shirt.

"It lets them know that if a police officer gives you a command it's because he sees your shirt at a distance and thinks you're carrying a gun," he said.

It says law enforcement may overreact to the shirt or mistake it for a real gun, so never reach for it, as those actions could get a person killed.

"Listen to the officer. If he says, 'freeze, halt, stop,' just listen to him."

Leibe says he has not heard of any major conflicts with law enforcement regarding his shirts.

Is the U.S. teetering on a recession?
Thanks for reading CBS NEWS.
Create your free account or log in
for more features.
View CBS News In
CBS News App Open
Chrome Safari Continue
Be the first to know
Get browser notifications for breaking news, live events, and exclusive reporting.