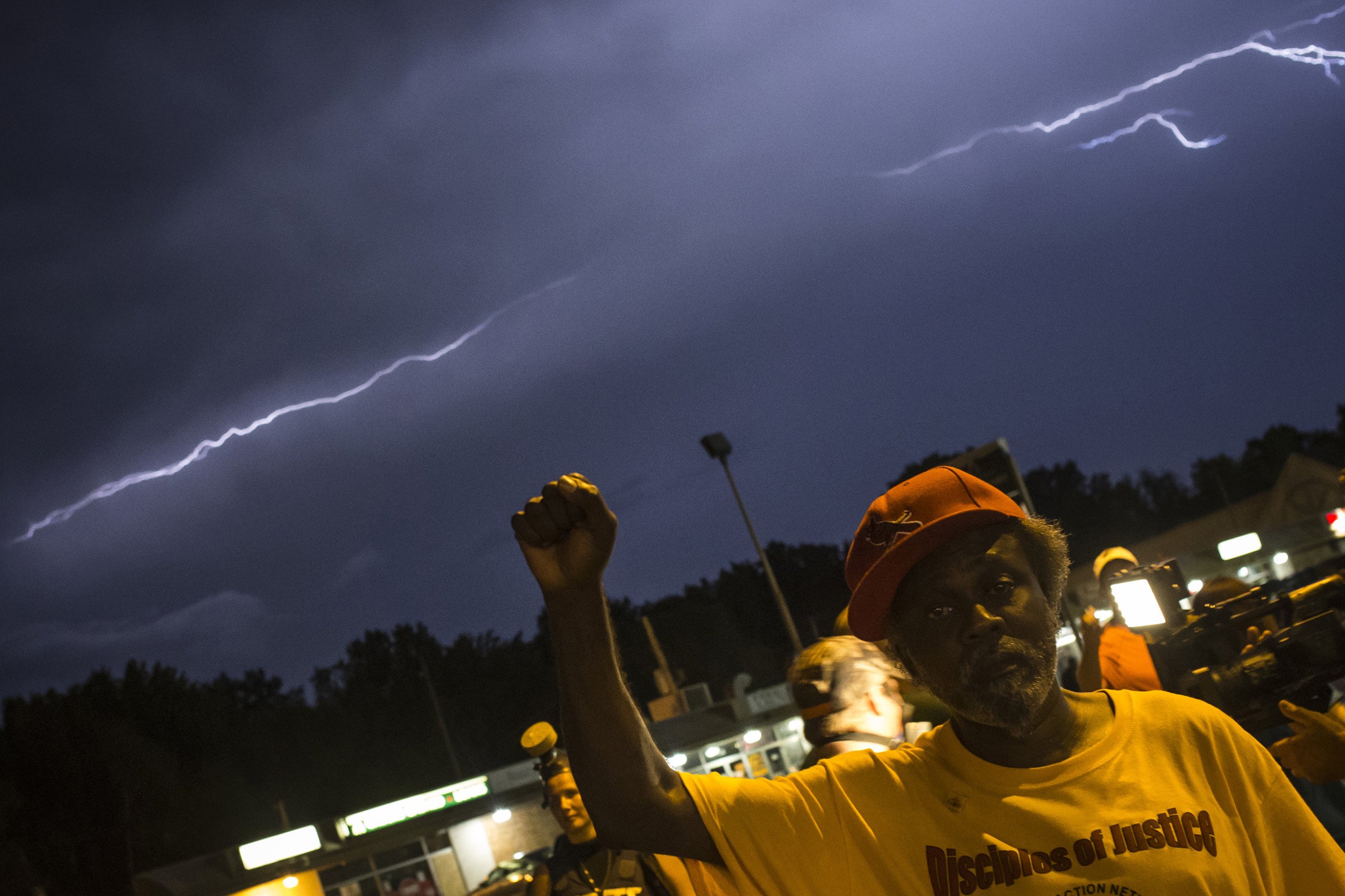 FERGUSON, Mo. -- Some demonstrators returned to the streets of Ferguson, Missouri Wednesday evening, but in diminished numbers.

They marched around a single block as a thunderstorm filled the sky with lighting and dumped rain.

Police still stood guard, but many wore regular uniforms rather than riot gear.

Missouri State Highway Patrol Capt. Ron Johnson, who has been in charge of security in Ferguson for nearly a week, told reporters early Thursday there were six arrests, compared to 47 the previous night, and called it "a very good night."

Tension has been thick in the St. Louis suburb since a white police officer shot unarmed black teenager Michael Brown to death on August 9.

"Tonight, the radios were mostly quiet," Johnson said. "There were no Molotov cocktails, no fires, no shootings. Tonight, we deployed no smoke, no tear gas, and no mace."

At one point, reports CBS St. Louis affiliate KMOV-TV, two people demonstrating in support of Darren Wilson, the officer who shot Brown, were removed from a crowd of protesters.

To reassure the people of Ferguson, Holder reached into his own past, recalling the times he had been stopped by police officers who seemed to target him because of his race.

Holder sought to build confidence in the investigation into Brown's death. The trip also underscored the priority to the Obama administration of civil rights in general and the Brown case in particular.

The attorney general said he understands why many black Americans do not trust police and that he had experienced many of the same frustrations. He described being stopped twice on the New Jersey Turnpike and accused of speeding. Police searched his car, looking through the trunk and under the seats.

"I remember how humiliating that was and how angry I was and the impact it had on me," Holder said during a meeting with about 50 community leaders at the Florissant campus of St. Louis Community College.

Holder made similar comments at an NAACP convention in July 2013 after a Florida jury acquitted neighborhood watch volunteer George Zimmerman in the shooting death of black teen Trayvon Martin.

Once, while living in the Georgetown neighborhood of Washington, Holder was running to catch a movie with his cousin when a squad car rolled up and flashed its lights at the pair. The officer yelled, "Where are you going? Hold it!" Holder recalled.

His cousin "started mouthing off," and Holder urged him to be quiet.

"We negotiate the whole thing, and we walk to our movie. At the time that he stopped me, I was a federal prosecutor. I wasn't a kid," he said.

Holder also met with federal officials investigating Brown's death and with Brown's parents. Before getting briefed at the local FBI headquarters, he said he hoped the visit would "have a calming influence" on the area.

In addition, the attorney general met briefly with Capt. Johnson.

Asked whether he had confidence in the local investigation of the police officer, Johnson said Holder's presence "is a guarantee on that."

In nearby Clayton, a grand jury began hearing evidence to determine whether the officer, Darren Wilson, should be charged in Brown's death. A spokesman for St. Louis County Prosecutor Bob McCulloch said there was no timeline for the process, but it could take weeks.

Outside the St. Louis County Justice Center, where the grand jury convened, two dozen protesters gathered in a circle for a prayer, chanted and held signs urging McCulloch to step aside.

McCulloch's deep family connections to police have been cited by some black leaders who question his ability to be impartial in the case. McCulloch's father, mother, brother, uncle and cousin all worked for the St. Louis Police Department, and his father was killed while responding to a call involving a black suspect.

The prosecutor, who is white, has insisted his background will have no bearing on the handling of the Brown case, which touched off days of protests that have sometimes turned violent at night, when authorities used tear gas and rubber bullets to clear the streets.

On Tuesday, Missouri Gov. Jay Nixon said he would not seek McCulloch's removal from the case, citing the "well-established process" by which prosecutors can recuse themselves from pending investigations to make way for a special prosecutor.

On Wednesday, police said an officer had been suspended for pointing a semi-automatic assault rifle at demonstrators, then cursing and threatening to kill one of them. A protester captured the exchange on video Tuesday and posted it to YouTube and other websites.

The Justice Department has mounted an unusually swift and aggressive response to Brown's death, conducting an independent autopsy and sending dozens of FBI agents to Ferguson in search of witnesses to the shooting.

Brown's funeral is set for Monday in St. Louis. His uncle, the Rev. Charles Ewing, will deliver the eulogy. The Rev. Al Sharpton will also speak. Brown will be buried at St. Peter's Cemetery in St. Louis County.

Holder said the Obama administration has been working to achieve change through the Justice Department's civil rights division.

"The same kid who got stopped on the New Jersey freeway is now the attorney general of the United States," he added. "This country is capable of change. But change doesn't happen by itself."