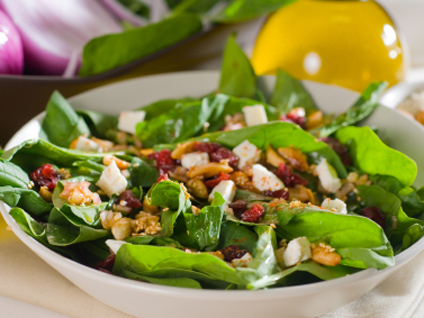 We all know what we eat affects our waistlines, but our food choices can also affect how we feel.

Who hasn't reached for that sugary snack when feeling stressed out?

But there are healthier options that may actually make us feel better, no matter what mood we're in.

She says, "Countless researchers have compared people who are deficient in particular nutrients to those who eat enough of them and determined that there are real, significant differences in how they feel.

As for the form the foods come in - meals or snacks or both - Zanzinger says that, "While it's ideal to make healthy choices throughout the entire day, one individual food can make a difference. Think about it: If you eat a sugar-heavy doughnut for breakfast, your blood sugar will spike, then drop soon after, leaving you feeling jittery and cranky by mid-morning -- whereas if you eat a bowl of oatmeal, the nutrients in the whole grains stabilize your blood sugar, giving you energy until lunch."

The mood-food connection is actually a two-way street, Zanzinger observes, pointing out that, "When we're feeling down, our first impulse is to reach for the pint of ice creams, but when you get to the bottom of the container, you feel guilty, bloated and unsatisfied. So the key is to stop yourself before you make that bad decision!"

Spinach is rich in iron, which carries oxygen to your brain. If you're not getting enough iron, you're depriving your brain of oxygen, which can make you feel fatigued. It's also rich in folate, a nutrient that can boost your levels of serotonin, a feel-good hormone.

Citrus is another great pick, because the vitamin C helps your body absorb iron. Even the scent of citrus may help perk you up. The worst thing you can do is reach for a quick-fix like a candy bar that'll give you a burst of energy but then you'll crash. A food that's full of carbohydrates and fiber, however, like beans, will give you enough energy to power through the afternoon.

Often, crankiness is a result of a blood sugar drop. To combat it, you need the one-two punch from a complex carbohydrate and a protein to keep your blood sugar consistent throughout the day. An apple provides the healthy carbs and the peanut butter has the protein. Some other examples of this combo are carrots and hummus and blueberries and cottage cheese. Now if you need a grab-and-go fix, reach for a handful of edamame. The boiled soybeans are packed with both carbs and protein.

Women with PMS symptoms could snack on calcium-rich foods

It turns out that not all comfort foods are our enemies -- grilled cheese on whole grain bread is a perfect combination of carbs and calcium, both of which women particularly need in the days before their periods. Carbs boost seratonin levels, but you want to stick to whole grains, which won't leave you feeling sluggish the way refined carbs do. Researchers have found that some women with PMS have lower blood levels of calcium while they're ovulating, so the calcium-rich cheese will give you the boost you need to feel better.

Low levels of omega3 fatty acids have been linked to depression. So you want to load up on oily fish, like salmon, mackerel and sardines. Salmon is also rich in B12, which is a mood-elevating vitamin, so it's a double whammy. If you don't like fish, snack on some walnuts, which are also a great source of omega3s.

Oatmeal with almonds on top

Both oatmeal and almonds are magnesium-rich foods, and magnesium is a naturally powerful relaxant - it can even help you sleep. In fact, both anxiety and insomnia are signs of magnesium deficiency.

Green tea contains L-theanine, an amino acid that's been proven to calm you down. You may also feeling irritable because your body is low in vitamin B6, so you can get your fill from foods like bananas, chicken, potatoes and brown rice.

A recent study found that eating just a smidge of dark chocolate, 1.4 ounces, about two squares of a chocolate bar, has the power to lower the stress hormone cortisol in your body. If you feel like having an entire bar on hand is too tempting, pick up a bag of individually-wrapped chocolates, like Ghirardelli or Dove. And here's the best part: if you eat this amount every day, you'll reap even greater benefits.