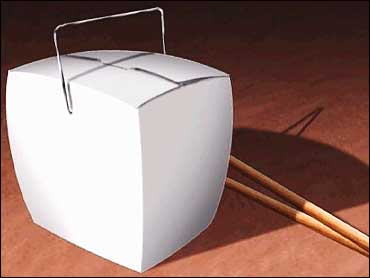 Column A, the foods that are bad for you. Column B, foods that are good for you. The typical Chinese restaurant menu has much more A than B, a consumer group sometimes called "the Food Police" has found.

"Like almost all restaurants, Chinese food is loaded with calories and salt, which is bad for waistline and your blood pressure," Bonnie Liebman, nutrition director of the Center for Science in the Public Interest, told CBS News.

A plate of General Tso's chicken, for example, is loaded with about 40 percent more sodium and more than half the calories an average adult needs for an entire day.

The battered, fried chicken dish with vegetables has 1,300 calories, 3,200 milligrams of sodium and 11 grams of saturated fat.

"I don't want to put all the blame on Chinese food," said Liebman, which did a report released Tuesday.

"Across the board, American restaurants need to cut back on calories and salt, and in the meantime, people should think of each meal as not one, but two, and bring home half for tomorrow," Liebman said.

The average adult needs around 2,000 calories a day and 2,300 milligrams of salt, which is about one teaspoon of salt, according to government guidelines.

In some ways, Liebman said, Italian and Mexican restaurants are worse for your health, because their food is higher in saturated fat, which can increase the risk of heart disease.

While Chinese restaurant food is bad for your waistline and blood pressure — sodium contributes to hypertension — it does offer some redeeming features.

"The good thing about Chinese food is that you can get vegetable-rich dishes, and it's got the kind of fat that isn't bad for your heart," Liebman said. "Soups across the board are low in calories, about 100 calories per cup, but high in salt, 1,000 milligrams per cup, so stay away."

"We were shocked. We assumed the vegetables were all low in calories," Liebman said.

Also surprising were some appetizers: An order of six steamed pork dumplings has 500 calories, and there's not much difference, about 10 calories per dumpling, if they're pan-fried.

"A portion of four spare ribs is like having two pork chops before dinner," Liebman told CBS News.

The group found that not much has changed since it examined Chinese food 15 years ago. That's not all bad, Liebman said.

"We were glad not to find anything different," she said. "Some restaurant food has gotten a lot worse. Companies seem to pile on. Instead of just cheesecake, you get coconut chocolate chip cheesecake with a layer of chocolate cake, and lasagna with meatballs."

The group says there is no safe harbor from sodium on the Chinese restaurant menu, but it offers several tips for making a meal healthier: