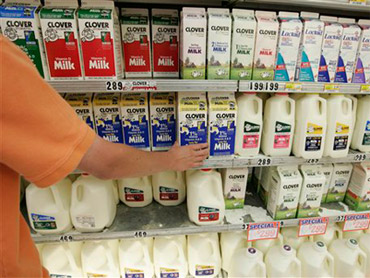 Do you know the difference between "whole grain" and "multi-grain" or "free-range" and "free-roaming"? Food labels can be a little confusing, so "Early Show contributor Katie Lee appeared on the broadcast Thursday with information on how to decode those confusing food labels:

Why Should You Care About Pesticides?
The growing consensus among scientists is that small doses of pesticides and other chemicals can cause lasting damage to human health, especially during fetal development and early childhood. Scientists now know enough about the long-term consequences of ingesting these powerful chemicals to advise that we minimize our consumption of pesticides.

Will Washing and Peeling Help?
Nearly all the studies used to create these lists assume that people rinse or peel fresh produce. Rinsing reduces but does not eliminate pesticides. Peeling helps, but valuable nutrients often go down the drain with the skin. The best approach: eat a varied diet, rinse all produce and buy organic when possible.

Poultry/Eggs
Free range or free roaming, according to the U.S. Department of Agriculture means producers must demonstrate to the Agency that the poultry has been allowed access to the outside.

What is organic chicken?
Organic chicken is chicken that has only been fed organic grains, which means that no pesticides or chemicals were used on the farm to grow the grain in the last three years. The chicken must also never have been given antibiotics, drugs, or hormones to accelerate growth, though they will be given medicine should they fall ill. Also, the chicken must be given free range with access to outdoors and be treated properly.

Grass-Fed Beef:
The definition of grass fed beef generally means beef from cattle that have eaten only grass or forage throughout their lives, however some producers do call their beef grass-fed but then actually finish the animals on grain for the last 90 to 160 days before slaughter.

Grass-Finished Beef:
A more specific definition is Grass Finished Beef. Finishing is just another word for the time that cattle are normally fattened for the last few months before processing. Typically, feed lots finish cattle for 90 to 160 days on grain, usually corn, whereas, grass finished cattle are fattened on grass only, until the day that they are processed.

Grass finishing compared to grain finishing:
When considering the definition of grass fed beef, most beef animals have probably eaten grass at some point in their lives, but the important thing is that they're "finished", or fattened on grass, rather than grain, for the 90 to 160 days before slaughter.

During those few months of grain finishing the levels of important nutrients like conjugated linoleic acid (CLA) and omega 3 decrease dramatically in the beef animal's tissues. It is in the finishing process that those levels and ratios drastically decline because of the grain feeding, and that is why it's so important to make sure that the beef you eat is not only grass fed, but grass finished.

Seafood
From both a nutritional and environmental impact perspective, farmed fish are far inferior to their wild counterparts:

Due to the feedlot conditions of aquafarming, farm-raised fish are doused with antibiotics and exposed to more concentrated pesticides than their wild kin. Farmed salmon, in addition, are given a salmon-colored dye in their feed, without which, their flesh would be an unappetizing grey color.

Aquafarming also raises a number of environmental concerns, the most important of which may be its negative impact on wild salmon. It has now been established that sea lice from farms kill up to 95 percent of juvenile wild salmon that migrate past them.

The only downside to wild caught salmon is the price, often times up to $10 more expensive than farm-raised per pound.

With foods like oatmeal, bulgur wheat, brown rice, popcorn, or quinoa, you're always getting the whole grain-and these are all great foods to include in your diet. It gets trickier with foods like breads, crackers, pasta, and tortillas, where the grains have been milled into flour. Then, it can be a little harder to tell whether you're dealing with whole grains or not.

It doesn't make it any easier that manufacturers go out of their way to make their products look and sound healthy, even when they aren't. They use molasses or food coloring to mimic the darker color of whole-grains. They add ingredients that create a dense, chewy texture. They use virtuous-sounding words like "stone-ground," "100 percent wheat," or "multi-grain." None of these things are a reliable indicator of whole grains.

"Multi-grain" bread, for example, could be made out of several types of refined grains. Or, more likely, it's made with lots of refined white flour and small amounts of other whole grains.