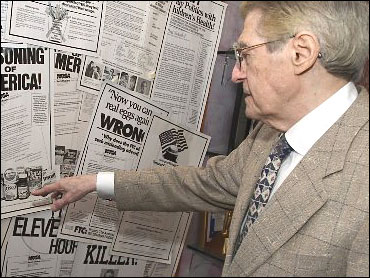 You may not know his name, but Phil Sokolof has probably changed how you think about what you eat.

He exorcised fatty, highly saturated oils from your breakfast cereal. He prodded you relentlessly to get your cholesterol tested. He was instrumental in getting nutritional labels put on everything edible, including your favorite candy bar.

Over almost two decades, the 81-year-old multimillionaire estimates he has poured about $15 million of his money into his mission to turn around American eating habits.

Though Sokolof himself may not be a household name, his work has touched nearly every household in the country.

A diminutive, retired businessman who wears simple suits and big glasses, Sokolof rose to prominence in the nation's nutritional field in the late 1980s and early 1990s for his trademark full-page ads placed in newspapers around the country.

One carried the headline, "McDonald's, Your Hamburgers Have Too Much Fat!" Another took a swipe at the dairy industry's labeling of 2 percent milk as "low fat," with a plus-size model donning a milk mustache below the question, "Would you let your child eat 9 strips of bacon a day?"

"I'd still like to reach more people with life-saving messages," Sokolof said, in the office of his Omaha-based foundation, National Heart Savers Association.

Founded in 1985, Sokolof's organization is focused on improving the nation's cardiovascular health. Inspired by his own heart attack 19 years earlier when he was only 43, Sokolof started Heart Savers not just as a means to charitably spend his millions but also a mouthpiece to preach the gospel of good health and exercise.

"We owe him a great debt as a country. He actually stood out and backed things at a time when people were dragging their feet," said Dr. William Castelli, director of the Framingham Cardiovascular Institute and former leader of the landmark heart-health study of residents in Framingham, Mass., that coined the term, "risk factor."

His heart attack came in 1965. Though he exercised regularly, "before it was fashionable," a diet characterized by greasy foods is what almost ended his life. His cholesterol level was 300 — higher than what the American Heart Association today classifies as high risk.

The experience sparked his interest in cholesterol and the need for the public to know more about the deadly artery-clogging substance.

His wife, Ruthie, who taught blind preschool children and died in 1982, inspired him to take his charitable work directly to the people. "Even though writing checks and giving away money is worthwhile, it doesn't compare with hands on," Sokolof said.

Approaching his new task with the same zeal and innovativeness as his business, Sokolof kicked off his efforts in 1985 by organizing a cholesterol testing campaign in Nebraska. That grew into a two-year, 16-state campaign that tested 200,000 people. Improvement after the first year in some of the toughest cases, which he personally counseled, showed the project worked.

"You can't count them in numbers, but you know what you're doing is helping people," Sokolof said.

He took the campaign to Washington in 1987, testing an estimated 10,000 people on Capitol Hill over five days and establishing April as National Know Your Cholesterol Month.

In an effort to persuade food makers to remove highly saturated tropical oils, like coconut and palm oil, from their products, Sokolof mailed thousands of letters to industry officials, receiving only a few replies. Calls to the companies weren't much more successful.

Deciding that targeting the company's reputations may be a more effective tactic, Sokolof sank about $500,000 into his first full-page ad titled, "THE POISONING OF AMERICA," which pointed out the dangers of tropical oils and pictured the products that used them.

When he called up the companies after the ads started running, "they would put me through to the vice president," he said.

One by one, food giants like General Mills and Procter & Gamble capitulated, pulling the oils from their products.

"His ads were so strong, so candid, that they helped move the issue," said Michael Jacobson, executive director of the Center for Science in the Public Interest, a consumer advocacy group.

A series of ads followed, culminating in a 1990 campaign to bolster federal legislation, requiring nutritional labels.

The tactic worked, which Sokolof calls his greatest triumph.

"That is an oddity or that is a fluke, because you just can't move Congress ... I didn't have the power to do that, but I had the power of the ads and the interest of the people," Sokolof said.

Surprisingly, the bill's sponsor, Rep. Henry Waxman, of California, said Sokolof never contacted him to let him know the ads were in the works. The congressman said the ads were essential in gaining public support for the successful legislation.

"He was a one-man show. He cared, and he was willing to fight for what he believed in," Waxman said.

"I decided I made enough money," said Sokolof, who then dedicated himself to Heart Savers.

Despite his successes, Sokolof acknowledges that his message has yet to be reflected in Americans' health.

Nearly a third of all adults — almost 59 million people — were rated obese in the 1999-2000 National Health and Nutrition Examination surveys based on body measurements. Nearly one-fourth of Americans live with cardiovascular disease, according to the Centers for Disease Control and Prevention.

Though Sokolof sees hope in the recent efforts of restaurant chains to introduce more healthy menu items, he said that groups like his are partially to blame for America's weight problem.

Health-focused groups and diet doctors have created an "overkill" of directives on what the public should or should not do, he said.

"If I could think of something that would hit home with people," Sokolof said. "But it's all out there. People already know it."

Although his energy level has started to wane with age, he continues to promote cholesterol-lowering drugs known as statins and would like to launch another ad campaign if a new heart health test becomes more affordable.

Abandoning his mission to fight fat and cholesterol in American diets doesn't seem to be an option.

"You know the pounds are just piling up year by year," Sokolof said.