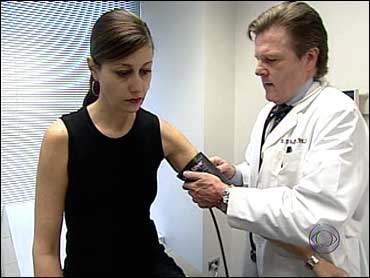 CBS News investigative reporter Sharyl Attkisson follows up on a 2006 report about possible links between antiperspirants and breast cancer.

An interesting follow-up to our investigative report from April 20, 2006 examining research on a possible link between antiperspirants and breast cancer.

A scientist we interviewed for our original report, Dr. Kris McGrath of Northwestern University Feinberg School of Medicine, recently published a new article in the Journal of Medical Hypotheses.

When we first reported on his work, Dr. McGrath had published peer-reviewed research in which he investigated a group of women with breast cancer. He found that the sooner they began using antiperspirants in their youth, the more frequently they used them, and the more frequently they shaved under their arms; the earlier they were diagnosed with breast cancer. The possible culprit, said Dr. McGrath, is the metal aluminum: the ingredient in antiperspirants that stops sweating.

The study was considered compelling, but by design was not conclusive. In his latest article, Dr. McGrath discusses hormonal similarities in breast cancer and prostate cancer.

"Breast and prostate cancer share similarities and likely represent homologous cancers in females and males, respectively. The role of hormones such as testosterone and estrogen in carcinogenesis is well established. Despite worldwide research efforts, the pathogenesis of these diseases is largely not well understood. Personal care products containing estrogens or xenoestrogens have raised concern as a breast cancer risk, especially in young African-American women. In the United States (US) there is a parallel rise in the incidence in breast and prostate cancer compared to selected non-hormone dependent tumors. Observed US and global breast and prostate cancer incidence increases were occurring before exogenous hormone replacement and xenoestrogen exposure were commonplace. An unintentional,inadvertent, and long term hormone exposure may occur from transdermal absorption of sex hormones
and pheromones (androgens) from axillary apocrine sweat gland obstruction by aluminum-based antiperspirants.The global rise in antiperspirant use parallels rises in breast and prostate cancer incidence and mortality rates. A multi-disciplinary literature based set of evidence is presented on how such a link is possible, to prompt confirmatory investigations in the pursuit of unmet needs in breast and prostate cancer etiology and prevention."


Three years ago, the FDA (which regulates over-the-counter drugs including antiperspirants) told us that the research on an antiperspirant-cancer link provided conflicting results and it hoped "definitive studies will be conducted in the near future." The antiperspirant industry, FDA, CDC and NIH all said there is no reason to throw away your antiperspirant in fear, but would not definitively rule out a link. Where do the government's health scientists stand today? It appears little has changed.

The current guidance on CDC's Web site remains as it was in 2006: "Because studies of antiperspirants and deodorants and breast cancer have provided conflicting results, additional research is needed to investigate this relationship and other factors that may be involved." To read more from the CDC: click here

As we reported three years ago, there are underarm products that do not contain aluminum: deodorants. Rather than stopping you from sweating, deodorants simply mask odor.

For further reading, see the below excerpt from the FDA Docket in 2003. At that time, the agency didn't rule out a cancer link, but stated there was "insufficient evidence to support these theories."