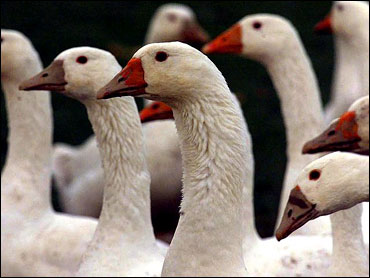 California will end the force-feeding of ducks, geese and other birds to produce the gourmet liver product foie gras by 2012 under legislation signed Wednesday by Gov. Arnold Schwarzengger.

The bill will also ban the sale of foie gras in California starting that same year if it's obtained by force-feeding birds.

Schwarzenegger, who received pleas from several celebrities, including former Beatle Paul McCartney, to sign the bill, said it gives producers more than seven years to "evolve and perfect a humane way for a duck to consume grain to increase the size of its liver through natural processes."

"If agricultural producers are successful in this endeavor, the ban on foie gras sales and production in California will not occur," he said in a statement.

Animal rights advocates called the governor's action "a major victory for the ducks and geese."

The state's lone farm engaged in the practice, Sonoma Foie Gras, also hailed it as a victory.

The company's president, Guillermo Gonzales, said his farm would use the time before the ban is implemented "to demonstrate that foie gras production is safe and proper."

Advocates for the bill said the restrictions are needed to stop a process in which birds are fed huge amounts of food three times a day through a tube inserted into their throats. The practice enlarges the birds' livers up to 10 times their normal size before they are slaughtered.

Foie gras - French for "fat liver" - is served in about 300 restaurants in California, according to the California Restaurant Association, which opposed the bill along with several major farm groups.

Among other celebrities who supported the bill were actors Martin Sheen, Kim Basinger, Alicia Silverstone and Mary Tyler Moore.