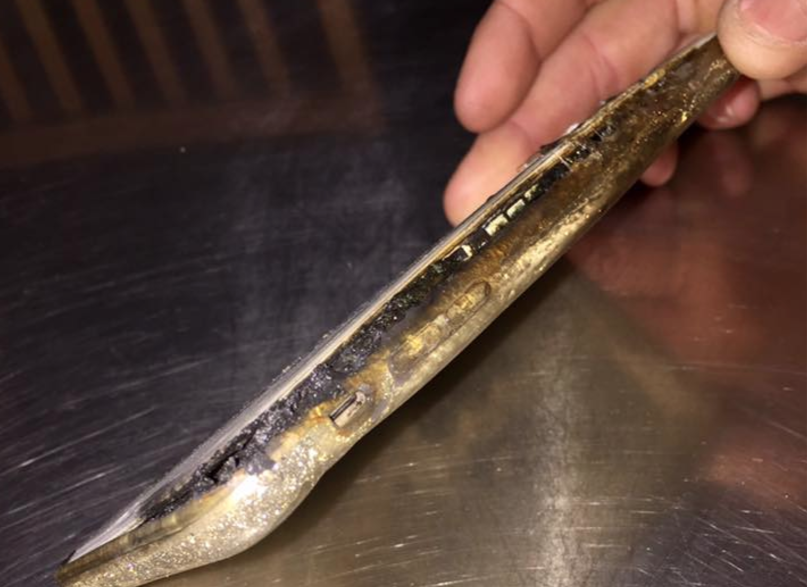 Like millions of smartphone owners, Amanda Bentz sleeps with her iPhone on a nightstand right next to her bed — a habit she never thought could potentially cause her harm.

The Palm Harbor, Florida resident learned that the hard way this week when she says her iPhone 6 Plus caught fire just “a foot away” from where she was sleeping.

“It woke me up,” Bentz told CBS affiliate WTSP. “The flames itself. There was no warning. It didn’t start sparking, smoking, nothing. Out of nowhere it just burst into flames.”

Now Bentz and her husband, Kyle, are warning others to be aware of the danger of charging the devices overnight.

“Those of you that charge your phones at night on your night stand, right next to your head or in a different room ... or when you’re not home please watch out,” Kyle posted on Facebook early Tuesday, along with several photos of the aftermath. “It’s a little scary waking up to your wife’s iPhone 6 Plus on fire right next to her head.”

Luckily, Kyle was able to put out the fire rather quickly — and only a comforter, pillowcase, drapes and an earring fell victim to the flames.

The power grid evolves to fuel the future

“I will tell you that’s a very awakening/sobering experience,” Kyle wrote.

The couple thought the charger may be to blame, but the base and cord didn’t feel hot.

“Not sure what happened,” Kyle said. “It’s something internal, because the charger was not warm at all.”

Bentz said they notified Apple of the issue, and the company said it would investigate the claim.

“They started the whole safety process and said they talked to engineers. We’re waiting to hear back to get a replacement device,” Bentz told WTSP.

Apple has not yet responded to CBS News’ request for further comment on this incident, but it’s not the first time the company has received complaints about an “exploding” iPhone 6 Plus.

In October, Darin Hlvaty, a student at Rowan College of Burlington County in New Jersey, said his iPhone 6 Plus caught fire during class, prompting students to evacuate the building.

“I flinched upwards because it was burning my leg,” Hlvaty said. “As I flinched up, I noticed that I was smoking.”

Apple also said it would investigate the matter at the time.

Apple’s biggest competitor, Samsung, has recently faced even bigger problems with phone fires. Samsung had to recall all of its Galaxy Note 7’s last fall after numerous reports of the phones bursting into flames. The company later determined the design and manufacturing of the phone’s lithium-ion battery was to blame.