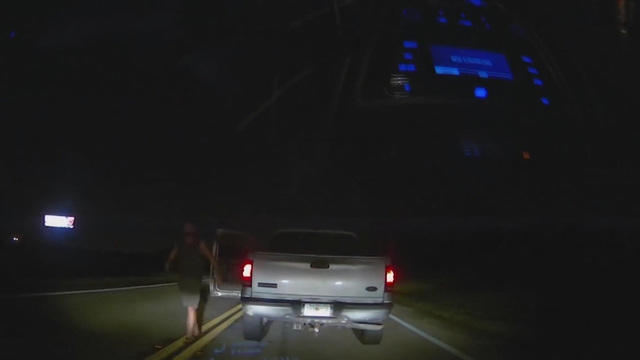 A Florida Uber driver who claimed self-defense in a new "stand your ground" controversy will not face charges for the deadly shooting of another driver. The Polk County Sheriff's Office released the Uber's dashcam video from the confrontation Tuesday morning.

It shows Jason Boek approach the car and apparently threaten Robert Westlake before Boek was shot. The sheriff's office says Boek thought his girlfriend was inside the Uber when he tried to force it off the road.

Boek stopped in front of Westlake, got out of his truck and pulled out a cellphone like a handgun as he approached the car. Video shows Boek yelling, "You know I got a pistol?...You want me to…shoot you?" Westlake called 911 as he tried to revive Boek.

"He ran me off road, jumped out of his vehicle. I couldn't get away. He came towards me shouting he's got a pistol. Reached toward his waistband," Westlake told the 911 operator. "I'm applying pressure to the wound. He's faintly breathing."

Police say it all started at a bar in Dundee, about 45 miles south of Orlando. Boek and his estranged girlfriend – Jessica Mazzarella – were drinking there when they got into a fight. Boek left but was still watching the bar from a truck he borrowed from a friend.

Police say Mazzarella was texting with Boek while also helping a bartender get an intoxicated customer into an Uber. Boek followed that Uber thinking Mazzarella was inside, but she wasn't.

He told her he planned on assaulting the driver. But what police say Boek did not know was that driver, Westlake, was a recent police academy graduate and armed with a legal concealed handgun.

"Here's a message for the hotheads of the community: Don't do that stuff. Good people carry guns, and they will shoot you a lot. Graveyard dead," Judd said.

This isn't the first controversial "stand your ground" incident in Florida. Earlier this month, a man was charged with manslaughter after police initially cited the law and declined to charge him for killing a man in a parking lot dispute. There's also the Trayvon Martin case. The unarmed 17-year-old was shot and killed in 2012 by George Zimmerman, who was acquitted.