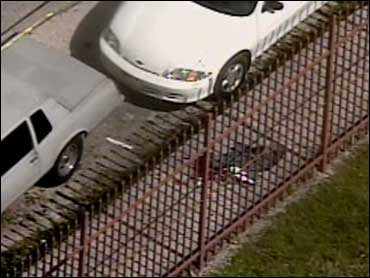 A teacher was shot and injured Tuesday outside a high school during an apparent robbery, forcing lockdowns of several schools for more than two hours.

Police detained three men for questioning but released two of them.

Detectives believe the third man, Patrick Lizely, is the suspect responsible for the shooting, and they have him in custody, reports CBS News affiliate WFOR-TV in Miami.

Sergio Miranda, had been taking a cigarette break with another instructor across the street from Miami Carol City Senior High School during lunch when they were confronted by another man who tried to rob them.

Miranda, who teaches math, "was alert as he was being transported to the hospital," said Quintin Taylor, a spokesman for Miami-Dade County Public Schools.

"I still can't believe it," 16-year old Ledarian Nixon told the Miami Herald. "Mr. Miranda is a great teacher. He didn't deserve anything like this."

Miranda was being treated at Jackson Memorial Hospital, said spokeswoman Maria Rosa Carrero, who added that she was not authorized to release details of his condition.

After the shooting, the two suspects left on foot, reports WFOR-TV. Tips to police and Crime Stoppers led Miami Dade SWAT members to an apartment complex near the school, where they took several people into custody.

Police had sealed off all the complex's exits, and a police helicopter hovered above.

A 911 call reported the shooting before noon at Miami Carol City Senior High School, Zabaleta said. Carol City elementary, middle and senior high schools were on lockdown, during which students were confined to their classrooms while police searched for the suspects. The lockdown was lifted after about two hours.