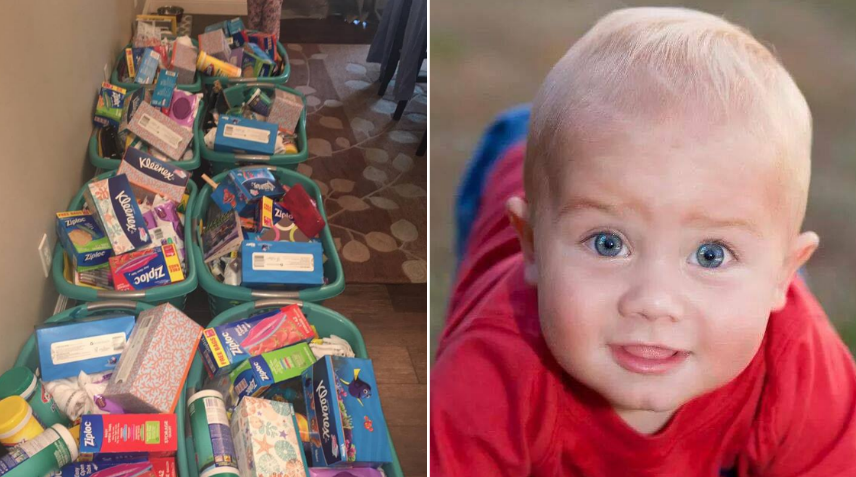 Courtney Scott has been dreading this day for years – the day her son would have started kindergarten.

On Monday, the grieving mother knew she would not be dropping off her 5-year-old son Carsyn at school on his first day as she once pictured.

Instead of sitting at home in sorrow, Scott decided to do something to honor her late son’s memory.

In July, the Viera, Florida, resident created a Facebook event ahead of Carsyn’s birthday seeking donations for local schools. To her surprise, dozens of people joined, and she raised more than $1,500 to put toward school supplies.

“I expected my friends and family may donate some, but everyone began sharing my event and soon donations were pouring in from all over,” Scott told CBS News.

So, with a big basket full of tissues, pencils and other items in her arms, the mom proudly walked into her son’s elementary school on his “first day” to hand teachers school supplies that they desperately needed.

“I didn’t get to walk into kindergarten with Carsyn, but I was able to walk in with his memory and that was special,” Scott said.

The mother of four other kids lost her husky, blonde-haired, blue-eyed baby four years ago when the 15-month-old boy accidentally fell into a neighbor’s koi pond and drowned.

While Scott says the sadness never goes away, she has made it her mission to continue his memory.

“I want the world to know about my son forever,” Scott said. “My biggest worry is that he would be forgotten by friends and family.”

Students, parents and school officials assured her that would never happen.

This year, eight different schools in Brevard County, including what would have been her son’s elementary school, received donations thanks to Scott’s initiative.

And this isn’t the first time Scott has paid it forward in Carsyn’s name.

Every year, the Scott family passes out flyers to encourage people to perform random acts of kindness and release 15 balloons to mark the 15-month-old’s birthday.

Scott isn’t sure what she’s going to do for the next school year, but she imagines it would bring a smile to her son’s face.

“It is my mission to continue his memory until I take my last breath,” she said.