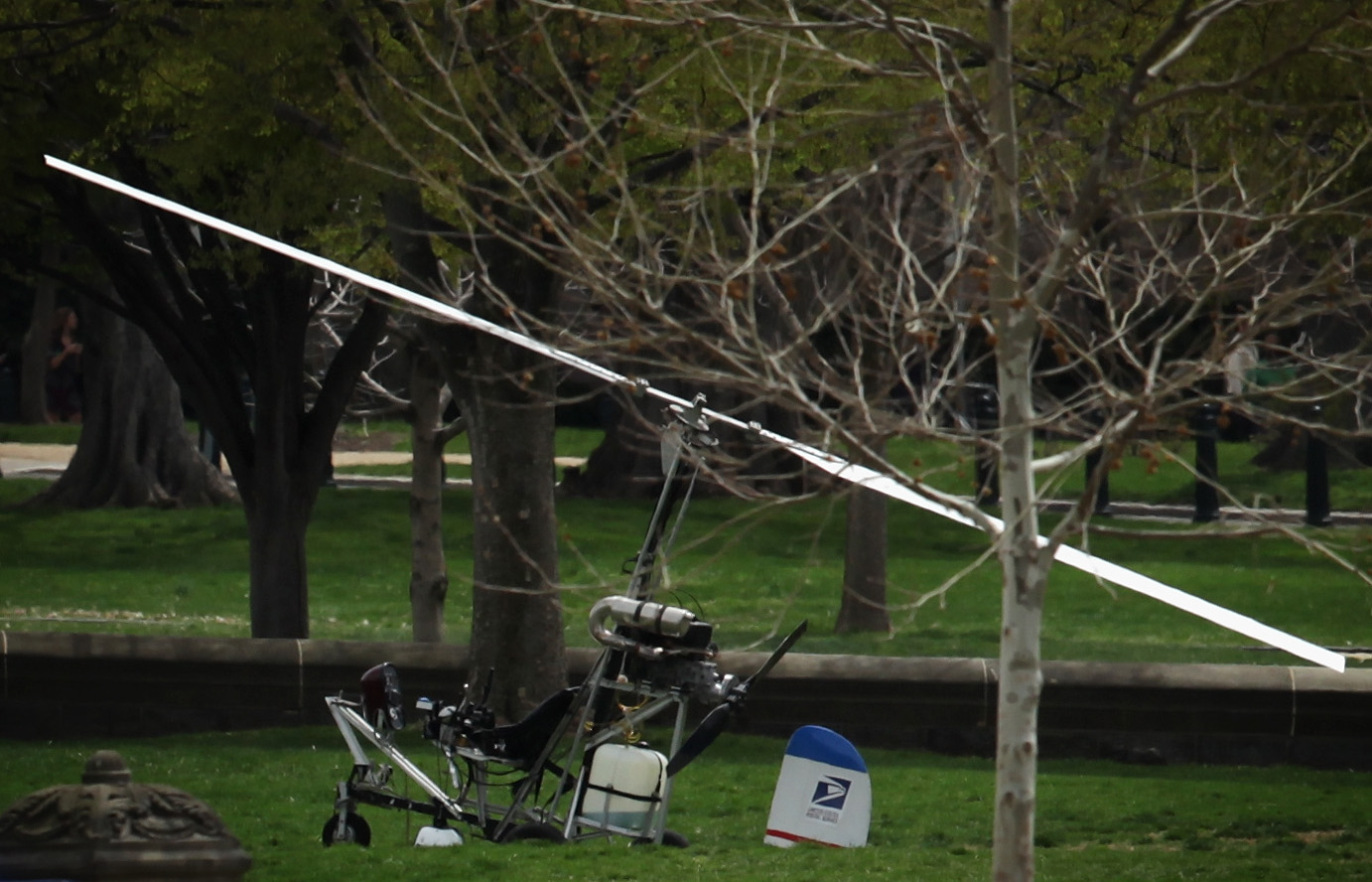 Florida resident Doug Hughes flew his gyrocopter to Washington, D.C. and landed it on the west front lawn of the Capitol building on Wednesday.

He reportedly flew the contraption to Washington to compel lawmakers to pay attention to the issue of campaign finance reform. So far, his stunt has drawn the attention of Capitol Police, who responded to the scene and apprehended Hughes. The Capitol Police bomb squad cleared the gyrocopter, finding nothing hazardous. They moved the vehicle from the Capitol grounds to a secure location.

"The U.S. Capitol Police continues to investigate with one person detained and temporary street closures in the immediate area," the Capitol Police said in a statement shortly after Hughes landed.

Hughes, who works as a mailman, drove his gyrocopter from Florida to an area outside of Washington last week, according to the Tampa Bay Times. Tampa Bay Times reporter Ben Montgomery told CBS News that Hughes took flight from Gettysburg, Pennsylvania around Noon on Wednesday. He landed outside of the Capitol building around 1:30 p.m.

Hughes apparently made the flight to Washington with 535 two-page letters, one for each member of Congress.

"I'm demanding reform and declaring a voter's rebellion in a manner consistent with Jefferson's description of rights in the Declaration of Independence," Hughes wrote in the letters. "As a member of Congress, you have three options. 1. You may pretend corruption does not exist. 2. You may pretend to oppose corruption while you sabotage reform. 3. You may actively participate in real reform."

Hughes told the Times that the U.S. Secret Service questioned him last year about his plans. Even so, he was willing to violate the law and fly his vehicle to the Capitol for his cause.

The Capitol Police is the lead agency in the investigation, federal officials told CBS News, while the FBI and other agencies are assisting. Investigators are also going to Hughes' home outside of Tampa.

Additionally, the Federal Aviation Administration (FAA) said in a statement that it is working with its aviation security partners in the D.C. area to investigate the incident. Airspace security rules that cover the Capitol and the District of Columbia bar private aircraft flights without prior coordination and permission. Hughes was not in contact with FAA air traffic controllers, the FAA said, and the agency did not authorize him to enter restricted airspace.

Meanwhile, the U.S. Postal Service's inspector general has been in contact with postal management on the matter, the agency said in a statement.

Shortly after Hughes' landing, President Obama was briefed about the incident, a White House official told CBS News. The official stressed that the briefing does not suggest that Hughes' flight was a national security matter, just that it was an event worth noting to the president.

As Roll Call points out, this isn't the first time this sort of vehicle has flown around the Capitol. The late Sen. Hiram Bingham, an explorer and aviation enthusiast who served in the Senate from 1924 through 1933, liked to fly his autogyro around the Capitol as well.