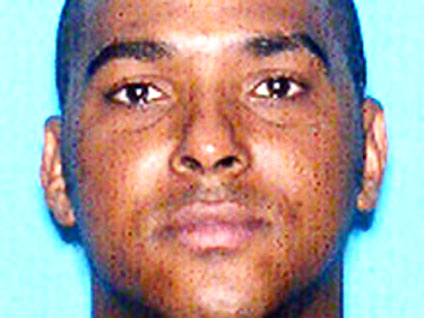 HIALEAH, Fla. (CBS/AP) A gunman shot and killed his wife outside a South Florida restaurant where she worked, then targeted women inside and killed three others before committing suicide, police said Monday.

"He went straight for the women," Rodriguez said.

Regalado is the half brother of former baseball star pitcher Orlando "El Duque" Hernandez, who pitched for the New York Yankees and the Chicago White Sox during his nearly 20-year Major League Baseball career.

The shooting began Sunday night in a parking lot outside the Yoyito Restaurant in Hialeah, where Regalado of Coral Gables was seen arguing with Liazan Molina, Rodriguez said. According to Florida marriage records, the couple married in 2007.

According to police, Regalado shot and killed Molina, 24, then entered the restaurant and fired on six women inside.

One employee called her brother after the shooting, saying she had been shot and was bleeding.

Felix Fuentes said his sister, Ivet Coronado, told him to "please call 911." He said the 36-year-old woman was recovering Monday from surgery for gunshot wounds to her chest and one of her arms.

Regalado drove off after the shooting, police said. Officers found him dead of an apparent suicide a few blocks away, with the same weapon used in the restaurant shootings, Rodriguez said.

People inside the Coral Gables house where Regalado and Molina lived refused to answer a reporter's knocks at the door. A person who answered the phone identified himself only as a family friend and said the family didn't want to talk.

"This has taken everyone by surprise," Maulini said.

Regalado came to Miami from Cuba in 2006, he said.

"We do not know what might have happened. He was a good kid. Since he arrived he has tried not to depend on his brother and do his own work," Maulini.

In a statement, Hernandez's family offered condolences to the families of the seven women. "It is with great pain that we reach out to everyone affected and offer our prayers in this time of sorrow," the statement said.

It was not immediately clear if all the women shot were restaurant employees or customers. The shooting began shortly after the restaurant had closed.

"Hurry! Hurry!" said one terrified woman in Spanish to the dispatcher. "That man killed them."

A male caller in Spanish is heard on another recording at 10:11 p.m. breathing rapidly and telling the dispatcher, "He entered the Yoyito Restaurant and began shooting like crazy."

He tells the dispatcher that the man and a woman had argued before the shooting started.

"They were arguing out in front of the restaurant ... he killed the girl," the man says.

A spokeswoman for Jackson Memorial Hospital declined to release any information about the three women being treated there because all had requested privacy. No contact information for one survivor, Yasmine Dominguez, could be found. There was no answer at the Hialeah Gardens mobile home of the third, 55-year-old Mayra Delacaridad.

No working phone number could be found for Molina's relatives in the Miami area. At the Hialeah home of 56-year-old Zaida Castillo, a relative said her family did not want to speak with reporters.

Two other victims, 32-year-old Maysel Figueroa and 47-year-old Lavina Fonseca, lived next door to each other in Hialeah. People inside Fonseca's home refused to answer the door, and a neighbor said Figueroa had lived in her small cottage for only about six months.

Regular customers in the city, which has a large Cuban-American population, gathered in shock outside the restaurant on Monday.

"They are good people," said Valentin Perez, 52, who visits the restaurant for his Cuban coffee every morning.

Octavio Guzman, another customer, said the restaurant workers are always generous with those who can't afford a meal.

"You tell anyone here, 'I'm hungry and I don't have money,' and they give it to you," Guzman said.