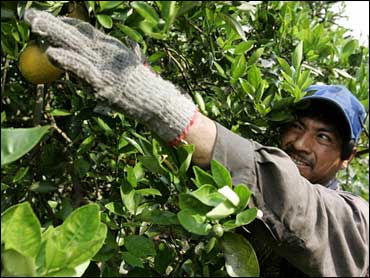 Florida fruit and vegetable growers braced Wednesday for what was expected to be one of the coldest nights of the year as temperatures were forecast to drop into the 20s in some parts of the state.

A hard freeze warning was issued for late Wednesday night for the northern two-thirds of the state, with the advisory stretching as far south as inland Palm Beach and Collier counties. A hard freeze can destroy vegetation.

A freeze warning was issued for the rest of the state.

Florida is at the peak of its winter agriculture season. Growers currently are harvesting citrus, strawberries, blueberries, tomatoes, snap beans, celery, sweet corn, cucumbers, eggplant, peppers, radishes, squash and ferns. The Sunshine State is a primary supplier of fresh fruits and vegetables to the rest of the country during winter months.

Gov. Charlie Crist has extended an executive order relaxing weight and height restrictions on vehicles taking crops to processing plants in an effort to help growers speed up their harvesting ahead of the chilly weather.

The greatest concern for the citrus industry was freezing weather in northern stretches of Florida's citrus belt around Orlando, but the bulk of the state's commercial citrus groves are further south. A spokesman for the state's largest citrus growers' group said temperatures in Florida's major orange growing regions were not expected to stay below 28 degrees for more than four hours - a duration that can trigger major damage.

"There will be pockets that do get damage, particularly in lower lying areas where it gets colder," Andrew Meadows, a spokesman for Florida Citrus Mutual said by e-mail.

Other fruit and vegetable growers, though, were expecting a tough night.

"I think everyone is really bracing for tonight," said Lisa Lochridge, a spokeswoman for the Florida Fruit and Vegetable Association, in an e-mail. "This'll be the tough one."