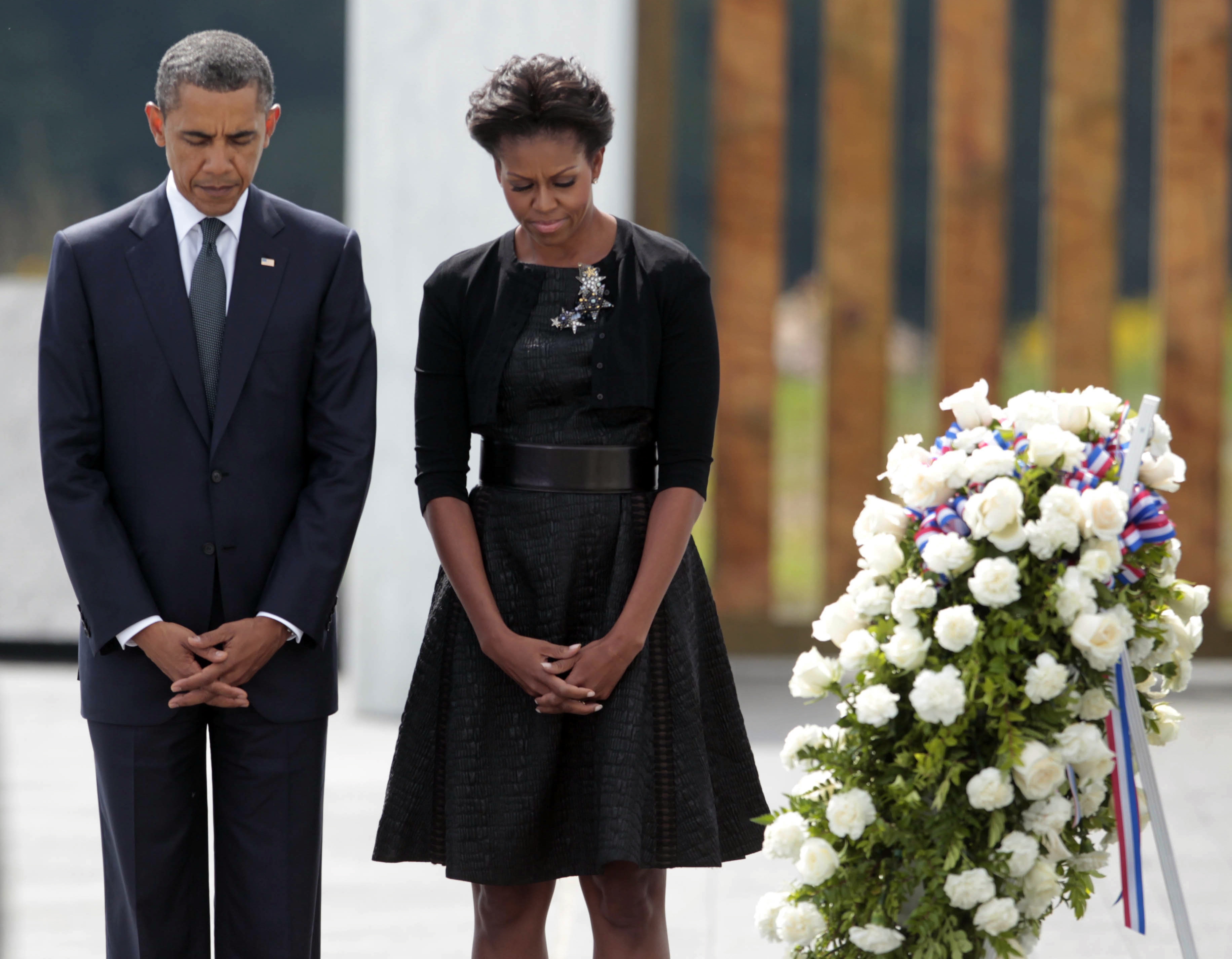 SHANKSVILLE, Pa. - President Obama and first lady Michelle Obama paid tribute on Sunday to the 40 passengers and crew members killed when Flight 93 knifed into a rural Pennsylvania field a decade ago.

In a field in rural Pennsylvania, Mr. Obama helped place a wreath at the marbled Wall of Names memorializing those who crashed at Shanksville after fighting back against the hijackers aboard their plane. The president then stood with Mrs. Obama in silent reflection while some members of the crowd applauded.  Each of the 40 marble slabs comprising the Wall of Names is inscribed with the name of someone killed in the crash of United Flight 93.

One man called out: "Thanks for getting bin Laden!" a reference to the death of Osama bin Laden, killed by U.S. forces in Pakistan earlier this year.

Jaleel Dyson, 18, came to the memorial to honor the victims but was excited to shake the president's hand and get a picture of him on his smartphone.

Dyson, who is from Washington, D.C., but attends college in the area, said he also attended the president's inauguration in January 2009. He said the 10th anniversary of the terrorist attacks was more important.

"I think it's just important that the president shows his support for the families that lost loved ones," he said.

Paying tribute to the victims of 9/11
Biden honors "9/11 generation" at the Pentagon
N.Y.C.: Moments of silence at ground zero

The visit comes as the families of the 40 passengers and crew were praised for helping to inspire a new generation of Americans while keeping the memories of their loved ones' dedication and courage burning brightly.

At a ceremony marking a decade since the Sept. 11 attacks, nearly 5,000 people listened as the names of the passengers and crew who were killed were read aloud while bells tolled. Afterward, a choir sang as those in the crowd - including family members, first responders, politicians and nearly 1,000 others who came to participate - listened intently.

"Over the past 10 years we have heard this place compared to many other places" including the Alamo and Gettysburg, Gov. Tom Corbett said at the newly dedicated national park that marks the site where Flight 93 crashed. "But the truth is that this place is  like no other because the deeds aboard Flight 93 were like no other."

Sunday's memorial service at the Flight 93 Memorial, about 60 miles southeast of Pittsburgh, was being held in concert with ceremonies in New York City and Washington, D.C., where other hijacked jets crashed into both towers of the World Trade Center and the Pentagon.

Former Gov. Tom Ridge, the nation's first head of homeland security, thanked the approximately 2,000 people who came to the memorial for Sunday's service.

"I think your presence today means almost as much to the families, perhaps as much as the memorial itself," Ridge said. "Your very presence is a powerful message of comfort and understanding and love."

The families then turned and gave the visitors a standing ovation.

Ridge went on to pay tribute to the victims, saying their actions prove "Americans don't live in fear, we live in freedom."

Gordon Felt, brother of passenger Edward and president of the Families of Flight 93, directed some of his comments to the relatives of the other victims. "I only wish I could have gotten to know each and every one of you under different circumstances," he said. "We lost too much."

Visitors to the Flight 93 service observed moments of silence at 8:46 a.m. and 9:03 a.m. - the times when two other airliners were crashed into New York's twin towers. They did the same at 9:37 a.m., when a third airliner hit the Pentagon.

There was no moment of silence at 10:03 a.m. at the memorial, but the emotion there was evident.

Susan Stine, 52, of Tamaqua, Pa., said she has come to the Flight 93 crash site to mark the anniversary each year.

"Everybody was going to New York for the first anniversary and we came here. I can't imagine not being here on 9/11," Stine said.

"The first time, I wanted to come here to see how it was, and it was amazing. I feel differently when I leave here every year," she said. "I feel better in my heart."

U.S. Rep. Mark Critz, D-Pa, choked up as he spoke about the Wall of Names, a series of 40 marble slabs inscribed with the names of the victims.

Told that the pattern of the wall delineates the flight path of the jet before it crashed, Critz said, "Ten years of emotion came rushing in."

The passengers aboard Flight 93 were hijacked after taking off from New Jersey.

Flight 93 crashed after passengers and crew, some alerted by cell phone calls from loved ones about the New York attacks, decided to try to wrest control of their plane from four hijackers.

The plane crashed during the struggle, and investigators later determined the hijackers intended to crash it into the Capitol in Washington, D.C., where the House and Senate were in session that morning.