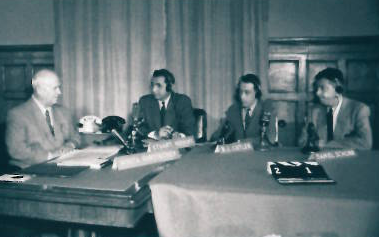 It sometimes feels like the Cold War has started up again these days, given the avalanche of recent news stories involving Russian malevolence – from the country's aggression in Eastern Europe to its efforts to intrude into U.S. electoral politics.

Sixty years ago, during the actual Cold War, Face the Nation traveled to the heart of the U.S.S.R. to interview Nikita Khrushchev, the First Secretary of the Communist Party of the Soviet Union (the title given to the Soviet leader.) Friday will mark the 60th anniversary of that groundbreaking interview, which aired on June 2, 1957.

The interview, as the announced noted at the top of the broadcast, brought viewers "for the first time inside these walls of the Kremlin on Red Square in Moscow." It was taped in Khrushchev's own office and conducted by Daniel Schorr, CBS News Correspondent in Moscow¸ B. J. Cutler, Correspondent for the New York Herald Tribune in Moscow and Stuart Novins, who was the moderator of Face the Nation at the time.

The sensitivity of the interrogation was established at the outset of the broadcast. In his introduction, the announcer explained, "In arranging the interview, Soviet authorities were informed of the broad areas of discussion to be covered on the program."  The scope of these areas ensured that the panel was able to ask any questions it desired – and, as the announcer always reminded Face the Nation viewers at the time, those questions were "spontaneous and unrehearsed."

After a brief discussion on the topic of agriculture, the interview turned to the relationship between the Soviet Union and the United States.  Asked what he considered the "most pressing points that must be solved between the two countries," Mr. Khrushchev responded, "I believe that the main thing is to normalize relations between our countries, between all the countries of the world and first and foremost between the United States and the Soviet Union…….We, for our part, are trying to do all we can to bring about a normal state of things and to bring about peaceful co-existence between countries with different systems.  That is to say, between capitalist countries and socialist countries."

Yet Mr. Khrushchev made it clear that he believed his country's system of socialism was the better option, boasting, "We do want to compete with you, and in that competition we want to have the most healthy forces come into the forefront, we believe that our socialist system represents the most healthy elements, because it is a younger system."

"I can prophesy that your grandchildren in America will live under socialism," he said.

The interview became somewhat contentious when the discussion turned to the post-World War II process of disarmament and troop withdrawal from Western Europe and East Germany.  Mr. Khrushchev railed against the disparity between the steps taken by the Soviet Union versus, in his opinion, the lesser steps taken by the United States, Britain and France.

Asked what steps the "Russian Soviet Government" was prepared to take to ease tensions between the countries, Mr. Khrushchev stated, "I am sure that we are constantly making those steps, but if one side makes a step and the other does not reciprocate in kind there will not be any relaxation in tension because this relaxation is not a one-way street.  A reciprocal step is necessary…"

At the time, the interview was the biggest scoop Face the Nation had yet landed. But it also proved to be controversial, given the Cold War tensions then gripping Washington. CBS was accused by some government officials of distributing communist propaganda. John Foster Dulles, the secretary of state, refused to watch the interview. And then-President Dwight Eisenhower suggested the whole thing wasn't quite on the level.

"We know that there are no prepared questions here and no prepared answers," he said from Washington. "It is a matter of trying to deal honestly with each other, and then putting it in the papers and on the radio and on the television screen; and this other performance of last Sunday afternoon was far from that."

There were even calls from some congressmen to ban foreign leaders from U.S. television unless the U.S. government sanctioned their appearance. But the CBS president at the time, Frank Stanton, stood by Face the Nation's interview, and today, the sit-down with Khrushchev is regarded as something of a journalistic milestone. It established the fact that broadcasters had the right to report the news without government interference, just like newspapers.

Watch the video above for the Khrushchev's full interview with Face the Nation from inside the Kremlin. And tune into Face the Nation on Sunday for the latest political news and analysis.