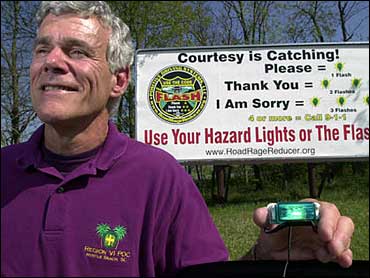 Even after 20 years of studying the habits of aggressive drivers, Scott Geller admits he has trouble containing his shouts and curses when someone swerves in front of him on the highway.

But the Virginia Tech psychologist thinks he knows a better way to deal with road rage, if only he could get other drivers to follow his lead.

The idea seems plausible enough: install a tiny green light at the back of every car, teach drivers to say "Please" and "Thank you" and "I'm sorry" with a series of quick flashes, and people will be less frustrated, less likely to run each other off the road.

Truckers already do this, communicating with their headlights. And motorists in some countries, such as South Africa, have been known to make their highways sparkle with conversations through hazard lights, Geller said.

But in most American cities commuters tend to keep to themselves and let the tension build, said Radford University professor Jerry Beasley, who approached Geller with the idea for the light system.

"We're trained on the road to be discourteous, to be aggressive," Beasley said. "People get in their cars, and all of a sudden they've got a ton of power. And everything's in place to communicate violence - people wanting to get somewhere before everyone else."

Beasley, who teaches self-defense and martial arts at Radford, said he has been trying to develop an automobile communication system for years. At first, he tried building a light fixture the size of a license plate that would flash "Thank you" at the touch of a button.

"It was too heavy," Beasley said. "It fell forward every time I stopped."

After meeting Geller at a conference, the two developed a less cumbersome system they now call The Flash. The thumb-sized light is attached with Velcro to the rear window. Powered by the cigarette lighter, The Flash can be seen from the front and the back by pushing a remote control button.

Geller has been testing the device for more than a year in his 1995 four-door sedan, squeezing off flashes according to a simple code Beasley copyrighted: one flash for "Please," two for "Thank you," three for "I'm sorry" and four for "Call 911."

"Our goal is to make a case for doing this on a much larger scale," Geller said. "My vision is that automobile manufacturers would offer an option to have a 'Courteous Communicator' in your car."

For now, that vision has two primary obstacles. The Flash is actually illegal in Virginia and many other states, which prohibit the installation of extra lights in cars. Secondly, Geller has no scientific data suggesting The Flash soothes aggressive drivers, or that anger is the main reason some people smash into each other on the road.

"It's a nice idea," said Stephanie Faul, a spokeswoman for the AAA Foundation for Traffic Safety in Washington. "But I would like to point out there is a communication device already attached to your car - it's called a turn signal - and some people don't even use that."

"So a better way to communicate could help in those situations," Deffenbacher said. "But in other situations - when at least one party has a high level of rage and wants to run the other guy off the road - you can have all the lights flashing you want, and I don't think it will do anything unless the lights are on top of a cop car."

After two failed attempts at funding research, Geller received $100,000 from the National Institute of Health to test the device, locating the experiment in Christiansburg, a town of about 17,000 in rural southwest Virginia.

Geller recruited 180 volunteers to follow the code, using either their hazard lights or The Flash. Everyone was instructed to keep journals about their experience and how signaling made them feel. The Flash was road-tested for about a month, and Geller plans to complete a research report in August.

Volunteer Sara Rayne, a Virginia Tech graduate, said being able to communicate with The Flash was a liberating experience. She showed it off while zipping around downtown Christiansburg in her friend's silver car.

"I think she saw me," Rayne said, pulling into the right lane in front of the car.

"It makes me feel a little bit more in control," she said afterward. "If someone cut me off, or if I cut someone off, I feel like I have the ability to tell them something."

It's still too soon to tell whether the project had any effect on Christiansburg, said Lt. Dalton Reid, the traffic safety coordinator for the town police. He agreed that the lights are illegal, though he hasn't heard of anyone getting a traffic citation for using The Flash.

"It's unnecessary or improper equipment," Reid said. "They might distract other drivers."

Geller promised his volunteers to pay for the ticket if anyone got one.

"But clearly, we're going to have to change the laws," he said.