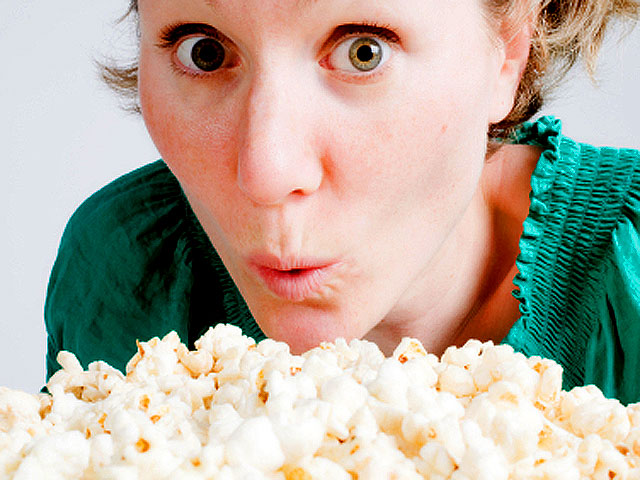 Movie chain operators are protesting proposed federal rules that could require them to disclose the calories on all concession snacks, including popcorn, a highly profitable item.

"Early Show" Contributor Taryn Winter Brill said, "Have you ever wondered how many calories you're actually consuming in that large popcorn with butter? You probably don't want to know. Pretty soon, though, you may not have a choice. "

Turns out a large buttered popcorn contains a gut-busting 1,460 calories -- the equivalent of nearly three McDonald's Big Macs -- and a full day's worth of eating.

Registered dietician Katherine Brooking, a contributor to Cooking Light magazine, said, "If you're looking at a typical female who is not highly active, that's probably your total calorie intake for the day, roughly 1600, 1,800; this is a calorie bomb waiting to explode."

Hoping to defuse this high-caloric catastrophe, the Food and Drug Administration (FDA) is working on a provision in the health care law requiring chain establishments that serve food to list the calorie count of their menu items. These rules already exist for restaurants like Burger King, McDonald's, and Denny's.

Brooking said, "It's all about education, so for those people who are making efforts to be more healthful, this is great to have more transparency and more information."

But will that knowledge convince cinema foodies to forgo their favorite theater snack?

Some establishments already post nutritional information in accordance with city or state laws, and customers are responding.

Another man told Brill, "I was going to order the nachos with cheese, but since I noticed the calorie count up on the board I said, 'No way, Jose.' Too many calories for me."

Movie theater chains are pushing back, though, arguing the original health care bill was never intended to include them.

Gary Klein, vice president of the National Association of Theatre Owners, told the Los Angeles Times, "It's dinner and a movie, not dinner at a movie."

Undeterred, the FDA is looking to sound the alarm on hidden calories, and ultimately shift Americans toward a healthier lifestyle.

Brooking said, "I would hope that the movie theaters offer, not only plain popcorn, but other healthful snacks like having fresh fruit there, having yogurt there, so this way the consumer can still go to the movies and have their popcorn or have something that is not as high in calories."

Brill added on "The Early Show" that she and her team reached out to the National Association of Theatre Owners, as well as to several movie theater chains.

She said, "They did not return our calls and those who did had no comment. Also, the federal rules regarding these menu labeling guidelines have not yet taken effect, but could be announced any day now."

Co-anchor Chris Wragge asked Brill, "Why are (the companies) so resistant?"

"It's all about money," she explained. "Believe it or not, these concession stand items generate one-third of the total revenue. This is a significant number. Specifically popcorn. If you want to talk about the numbers, Chris. The (chief executive officer) of Regal Entertainment Group -- we all know that theater company -- he says, on average, they sell (a) large bucket of popcorn for about $6. Take a guess at how much you think it costs them to actually make it."

"Less," Brill said. "Fifteen to 20 cents. So talk about a profit margin! So they're thinking you put those calorie numbers up, those profits of popcorn sales, way down."