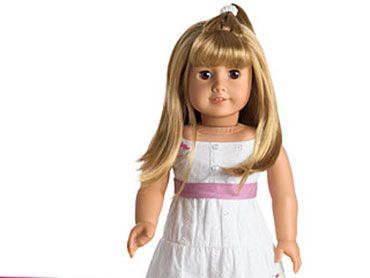 American Girl dolls are expensive and extremely popular - among the most sought-after toys among girls from ages four and up.

Each doll comes with its own storyline, and a relatively new doll is causing quite a stir.

"Gwen," which debuted this year, is portrayed as being homeless.

In an accompanying book and movie, "Chrissa Stands Strong," a friend stands up for Gwen against bullying classmates.

"I think (a 'homeless' doll is) a good idea," one mother shopping in an American Girl store told CBS News Correspondent Hattie Kauffman. "It kind of shows awareness to what's going on in the world."

"I think it's really a good idea, because homelessness affects everybody, at different economic levels," Herb Smith, president of the Los Angeles Mission, remarked to Kauffman. "I actually think it's a good teaching tool."

Not so fast, say some homeless advocates, such as one who observed to Kauffman that she finds "the whole concept to be extremely disturbing. It's not a doll I would ever buy for a child."

One homeless woman in a shelter Kauffman visited said Gwen touched her heart when she saw the doll in its box.

The women praised the doll, Kauffman reports, until they learned Gwen isn't a fundraising device for the homeless.

"I don't even see why you would make a homeless doll, anyway," one woman said to Kauffman, unless it was being used to raise money to help charities aiding the homeless.

American Girl says the dolls "offer valuable lessons about life," and it is "disheartened that there has been any confusion over our fictional characters." The company adds that, while no proceeds from sales of Gwen and related offerings go directly to help the homeless, it has given almost $500,000 since 2006 to HomeAid, a national nonprofit group that tries to help the homeless find housing.

Another concern of some advocates for the homeless is that the dolls could send the wrong message to kids. Tanya Tull, president of Beyond Shelter, says she's "afraid that they're going to pick up the idea that it's OK, that it's an accepted segment of society that some children are homeless and some children are not."

Gwen is a "limited edition" doll, only slated to be available for a few more months.

Will Ferrell As 'Frank The Tank'