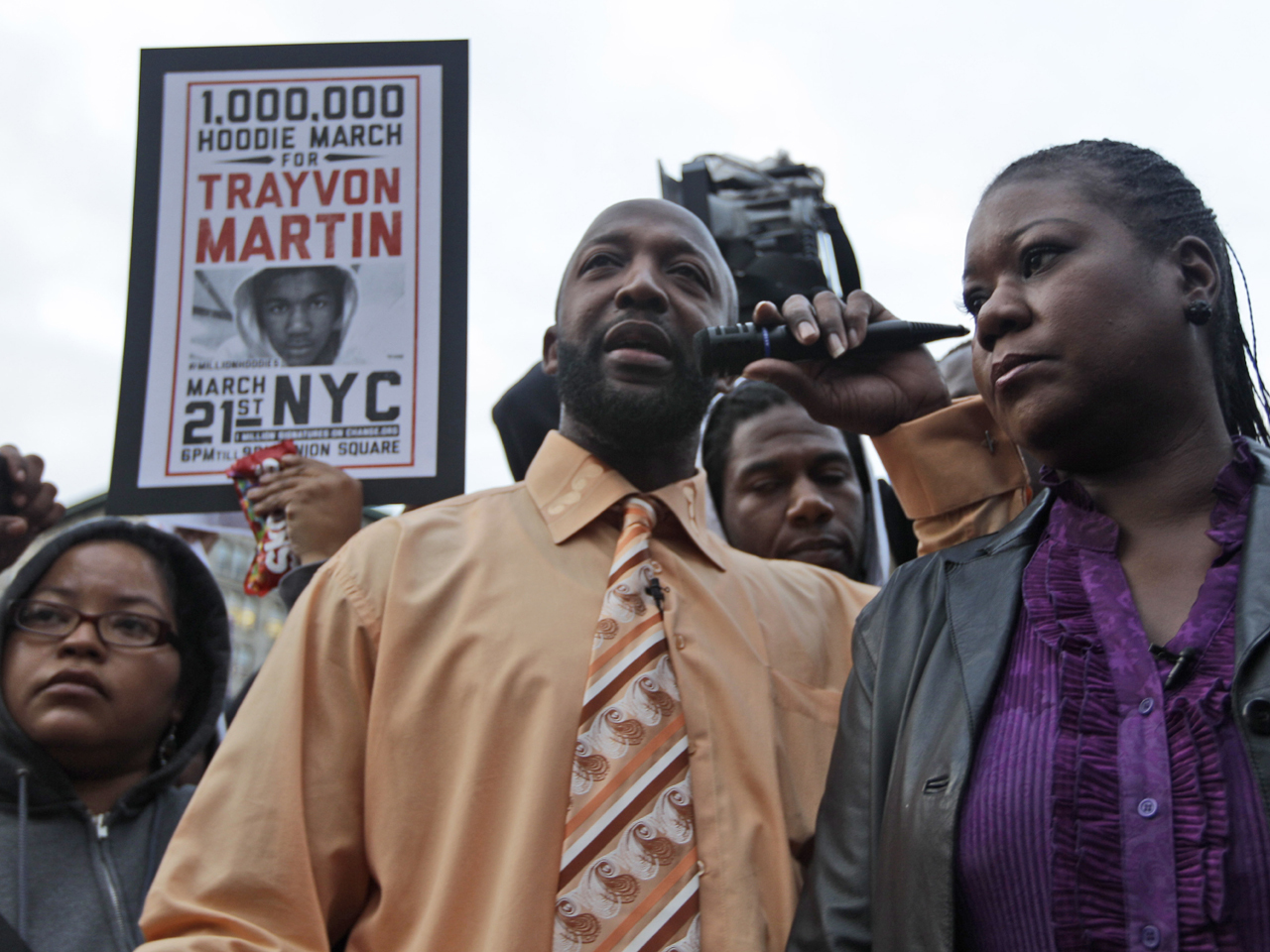 NEW YORK - The parents of a black teenager shot to death by a Hispanic neighborhood watch captain in Florida told hundreds of people at a march in his memory on Wednesday that they won't stop until they get justice for him.

"My son did not deserve to die," the teenager's father, Tracy Martin, said after thanking the crowd.

Martin's son, 17-year-old Trayvon Martin, was killed Feb. 26, in Sanford, Fla. He was returning to a gated community in the city after buying candy at a convenience store. He was unarmed and was wearing a hooded sweat shirt, called a hoodie.

The neighborhood watch captain, George Zimmerman, has not been charged in the shooting. Zimmerman has said the teen attacked him and he shot him in self-defense.

"My son was fearing for his life," Tracy Martin told CBS News at the New York rally on Wednesday. "So if anything, Trayvon was acting in self-defense." (Click player at left for a full report by CBS News correspondent Manuel Gallegus)

The Florida shooting has ignited a furor against the police department of the Orlando suburb of 53,500 people, prompting rallies and a protest in Gov. Rick Scott's office on Tuesday. The Justice Department's Civil Rights Division said it is sending its community relations service this week to Sanford to "address tension in the community."

Sanford city commissioners on Wednesday voted 3-2 to express "no confidence" in Police Chief Bill Lee Jr. over the handling of the fatal shooting. The commission can't fire Lee, however, because the police chief reports to the city manager.

City Manager Norton Bonaparte Jr. said late Wednesday he was "looking at all the circumstances" and will take the commission's vote into consideration.

On Wednesday night, demonstrators in New York chanted "we want arrests" during the Million Hoodie March in Manhattan's Union Square.

The teen's mother, Sybrina Fulton, told the crowd: "My heart is in pain, but to see the support of all of you really makes a difference."

The demonstrators greeted the teen's parents with "God bless you!"

The march in New York splintered into various groups, with some demonstrators heading to Times Square to hold an impromptu rally and dozens of others making their way to downtown Manhattan. At times, it appeared the march had become indistinguishable from an Occupy event, with some protesters climbing atop the Wall Street bull sculpture.

Earlier in the week, the federal agency opened a civil rights probe into the shooting, and in Florida, Seminole County State Attorney Norm Wolfinger said a grand jury will meet April 10 to consider evidence in the case.

Tracy Martin said he and his son's mother found out about the march after arriving in New York City, where they have done interviews about the case. They got in touch with the organizers to say they would attend and speak to the crowd.

The timing of the teen's parents being in the city when the march was happening was "incredible," said one of the organizers, Daniel Maree, who heard about the case earlier this week.

"I was outraged and wanted to do something about it," Maree said.

In recent days, information surrounding the teen's death has been coming out, including 911 calls and an account from his family's lawyer of a conversation he had with his girlfriend in the moments before his death.

Tracy Martin, asked how he was holding up, said he was trying to stay strong.