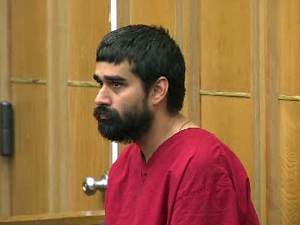 MIAMI – A Florida man accused of killing his wife, Jennifer Alfonso, and posting pictures of her corpse on Facebook after the crime, pleaded not guilty Wednesday to first-degree murder charges.

The plea was entered during a brief hearing by an attorney for Derek Medina, 31, who also faces charges of illegally discharging a firearm inside the couple's Miami home and with child neglect without violence. Alfonso's young daughter was home at the time, but was not harmed.

No decision has been made on whether the state will seek the death penalty, said Assistant State Attorney J. Scott Dunn. Miami-Dade Circuit Judge Yvonne Colodny set a Jan. 29 status hearing to discuss the potential death penalty and scheduled a tentative trial date for March 17.

Medina, in a red jail jumpsuit and with a full, dark beard, did not speak during the hearing. His attorneys have previously said he shot his wife in self-defense while she attacked him after several previous abusive episodes. Police say she was cowering and likely on her knees when Medina fired the fatal shots.

Prosecutors said they also have evidence that Medina had told other people he would kill Alfonso if she ever tried to leave him. Medina himself told investigators his wife had announced she was leaving earlier that day.

Medina attorney Saam Zanganeh said evidence received from Facebook totals between 7,000 and 8,000 documents and that the defense is still waiting for videotapes from a surveillance system inside the couple's home. Some of their confrontation is depicted on those tapes, but Zanganeh said attorneys want to look at more of it.

According to a statement Medina made to police, he decided to post the photos of his dead wife on Facebook to notify friends and family about what had happened. Their argument began, he said, after he failed to wake up in time for the couple's plans to watch movies on television.

Along with the photos, Medina added on Facebook, "Im going to prison or death sentence for killing my wife love you guys miss you guys take care Facebook people you will see me in the news."