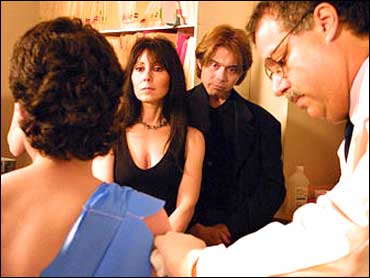 A procedure that takes only seconds to carry out has turned the Jacobs family into medical pioneers, reports CBS News Correspondent Bobbi Harley.

They are the first people to get "chipped" -- implanted with a tiny device called a VeriChip that emits radio frequencies. The chip is a personal ID that also contains vital medical information.

Jeff and Leslie Jacobs, along with their 14-year-old son, Derek, had the tiny chips implanted in their arms. Each chip is about the size of a grain of rice, and insertion takes about a minute under local anesthesia.

"It's great what it can do, it can save a lot of lives, including my dad's because he has a lot of medical problems and I want him to be around for a while," said Derek Jacobs.

"We're doing this as a security for us, because we've worked so hard to save my husband's life," said Leslie Jacobs, 46.

Her 48-year-old husband has suffered through cancer, a car crash, a degenerative spinal condition, chronic eye disease and abdominal operations. His injuries have forced him to quit his dental practice.

"It's been really easy and I feel a lot better that I have it," he said after the implant.

The chips were designed by Palm Beach-based Applied Digital Solutions Inc. They are similar to chips implanted in pets to identify them if they are lost. A hand-held scanner reads the VeriChip. Theoretically, police, paramedics and hospital workers would use the information during an emergency.

Keith Bolton of Applied Digital Solutions said that, "In the event that they are in an accident or for some reason unconscious and they can't speak, then the microchip or VeriChip will speak for them."

At a cost of $200 a chip, thousands of Americans are already lining up to get them. And, Applied Digital Solutions says this might only be the beginning.

Company scientists are already working on a global positioning system -- similar to what you'd use in your car -- but to track people. And like VeriChip, it would be small enough to implant in someone.

Nathan Isaacson is in the early stages of Alzheimer's disease. He already wears a beeper-like GPS gadget and will soon be injected with a VeriChip. Implanting both devices would give him and his family more peace of mind.

"I couldn't find my way home," he said. "It was kind of an embarrassing moment."

The chip, which could also be used as a security tool, has stirred debate over its potential use as a "Big Brother" device to track people or invade the privacy of their homes or workplaces.

Jacobs and his family brush aside those arguments. Anyone can be tracked through the Internet and e-mail, credit cards and cellular phones, they say. Losing a little personal privacy is a small price to pay for what one day may save their lives.

The chips used by the Jacobs family contain only telephone numbers and information about previous medications. The data can be read by a hand-held computer and printed out.

The Food and Drug Administration said in April that it would not regulate the implant as long as it contains no medical data. Company officials said they were free to proceed because the implant contains identification numbers that correspond to personal medical information in a separate database.

The FDA did not consider the implant to be a medical device, company officials said. An FDA spokeswoman in Miami did not immediately return a phone call. The FDA had said regulation would be needed if medical records were stored to guard against storage of outdated records.

Company officials hope to eventually include more extensive information. The company says it would be particularly valuable for those who suffer from Alzheimer's disease or others with difficulty providing medical information on their own.