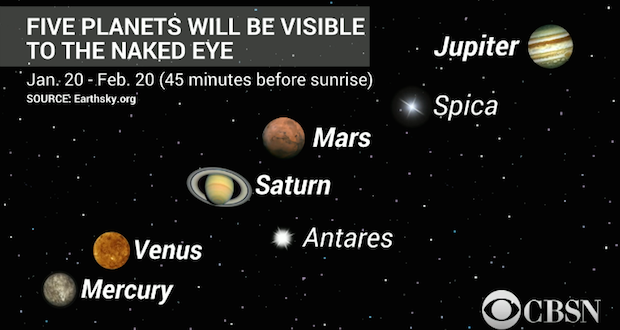 Morning people and skywatchers, take heed! For the next few weeks, five of the brightest planets in our solar system will be visible to the naked eye in the pre-dawn sky.

Mercury, Venus, Saturn, Mars and Jupiter will all be visible across the sky for the first time in more than a decade. You will also be able to see the stars Spica and Antares.

This quintet of planets can best be seen about an hour before sunrise from January 20 through the end of February.

Derrick Pitts, chief astronomer and planetarium director for The Franklin Institute in Philadelphia, shared some insights into how to spot the planets. "Stars twinkle, but planets don't," he told CBS News. "So if you're looking toward that portion of the sky -- eastern, southeastern, around to the south -- you will be able to tell the stars from the planets because the planets don't twinkle."

The planets should appear brighter than the stars. Pitts also said that Venus will be the brightest of the planets that you'll be able to see.

Towards the end of January the moon will help guide your eyes in the sky because it will slide past each of the planets as it transitions from a full moon to a new moon.

If you do have binoculars, Pitts said you will be able to see the four large moons of Jupiter. And with a telescope you can view the rings of Saturn.

It's been a long time since we've gotten a chance to see this alignment of the planets, but there will be another opportunity in the evening sky next August. "There will be some continued planet gathering going forward over the next several years," Pitts said. "But the planets won't be so high up in the sky."