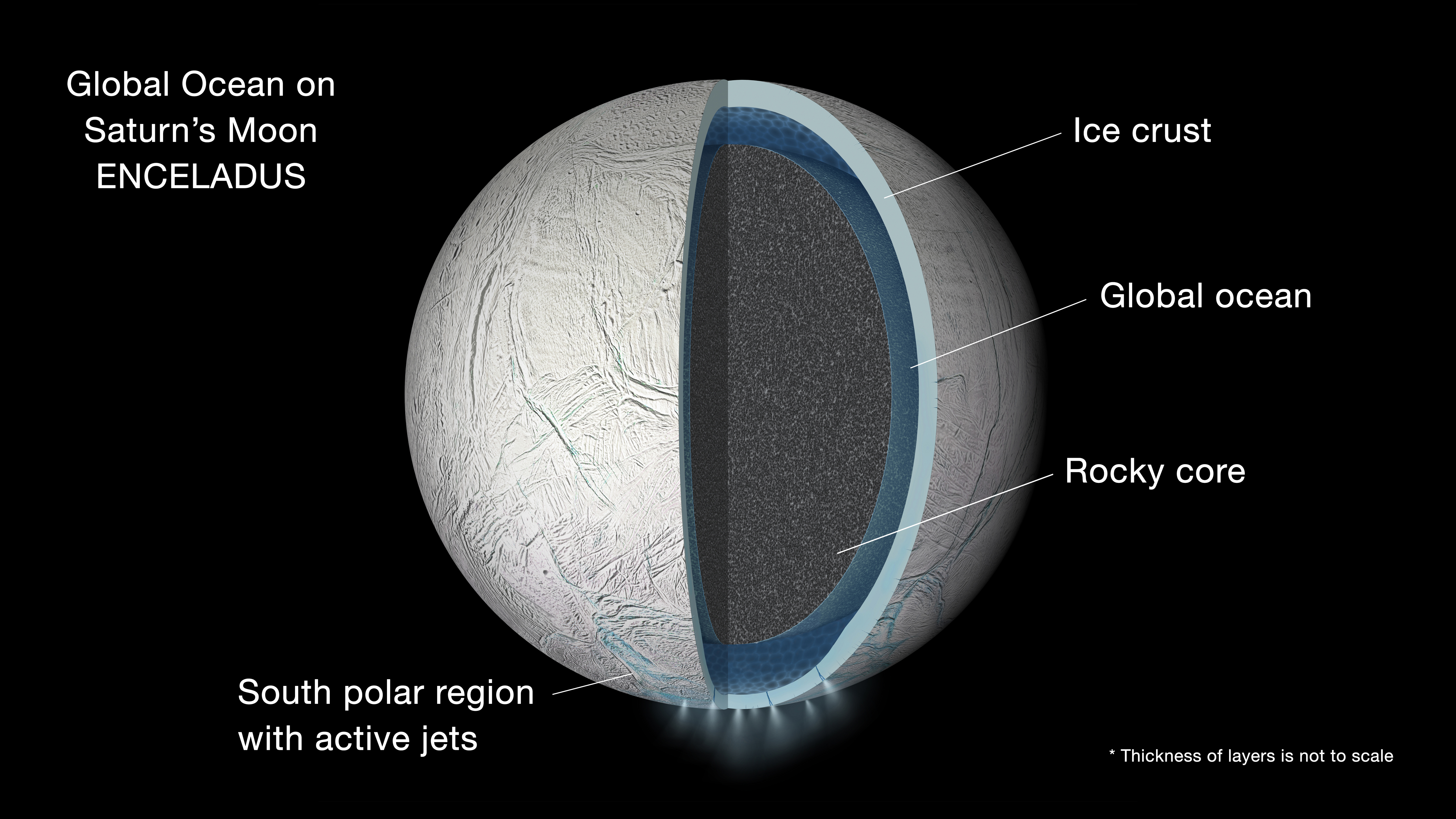 Beneath the ice-encrusted surface of Saturn's moon Enceladus churns a massive ocean.

New research using seven years' worth of data from NASA's Cassini mission has determined that a suspected underground sea at the moon's south pole is actually a global ocean between the moon's ice crust and its rocky core.

"This was a hard problem that required years of observations, and calculations involving a diverse collection of disciplines, but we are confident we finally got it right," Peter Thomas, a Cassini imaging team member at Cornell University and lead author of a paper published Tuesday in the journal Icarus, said in a statement.

The tip off? Enceladus' minute wobbling.

Thomas and his team analyzed images of the moon taken over seven years by the Cassini spacecraft, which has been orbiting Saturn since 2004. Comparing 5,800 craters and other topographic features across the images -- by hand -- they determined that as the moon travels along its orbit, it exhibits a slight wobble. Though only about a tenth of a degree, the aberration, called a libration, is much larger than would be expected if the moon's crust were solidly connected to its core.

"If the surface and core were rigidly connected, the core would provide so much dead weight that the wobble would be far smaller than we observe it to be," said Matthew Tiscareno, from the SETI Institute in Mountain View, Calif. "This proves that there must be a global layer of liquid separating the surface from the core."

As Thomas further explained to CBS News, "The surface will wobble more without the mass of the a core attached."

Plumes of water vapor, icy particles and organic molecules have been observed spouting from fractures in Enceladus' southern pole. The materials make up the basic ingredients that support life, and their presence on the moon has expanded scientists' views of potentially habitable zones within the solar system.

They were previously posited to come from a lens-shaped sea under the surface there. Along with gravity data collected during Cassini's close passes over the region, the new results confirm that the ejections are actually being fed by a global reservoir of liquid water.

"A global ocean, versus a regional polar sea, might possibly be more likely to be habitable since it might cover more compositional or thermal effects from the core, and might even be longer-lived," Thomas said. "However, we don't know the first part, and we don't know how old the ocean is."

Cassini is scheduled to make a close flyby of Enceladus on Oct. 28. Passing just 30 miles over the surface, it will be the mission's deepest dive yet into the moon's oceanic plumes.

The day Vesuvius blew its top