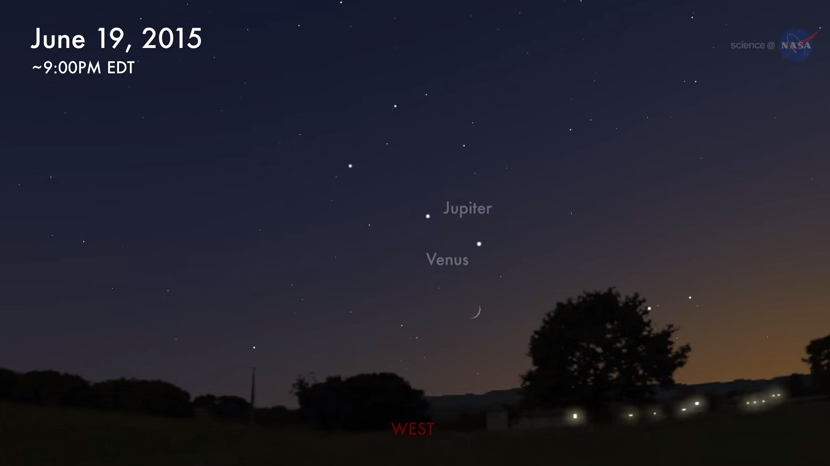 Stargazers this weekend are in for a treat.

Venus and Jupiter have been drawing nearer to each other in the sky all month. Friday and Saturday, after dusk, they will appear to come together and will most likely the brightest objects in the sky, after the sun and moon.

On the evenings of June 19th and 20th, stargazers will find Venus soon after sunset well up in the west. Jupiter will be about 6 degrees to its upper left, though only one-twelfth as bright. (They'll both be to the lower right of Regulus, the alpha star of the constellation Leo.)

The view will be most dramatic on the 20th, when the two planets and the moon will be bunched closely enough to be covered by an outstretched fist.

While they look to be bumping into one another, they are actually far apart. The moon is closest to us, just 247,000 miles away. Venus is 56 million miles from Earth, and Jupiter is 10 times farther out at just over 550 million miles.

A second, even more dramatic event occurs on June 30th, when Venus and Jupiter will appear so close together - just 1/3 of a degree apart - that they'll look like a tight, brilliant double star in the evening sky. A small backyard telescope will show both planets in the same field of view.

Jupiter and Venus spend eight evenings within 2 degrees of each other - about a thumb's width at arm's length - from June 27th through July 4th.

"Planetary conjunctions have no effect on Earth or human affairs," notes Sky & Telescope Senior Editor Alan MacRobert, "except for one: They can lift our attention away from our own little world into the enormous things beyond. That's what amateur astronomers do all the time. A spectacular conjunction like this often gets people started in the hobby. Once you start, there's no end to how far you can go."

The two planets have a history of dancing together - and will do so in the future.

They appeared slightly closer together before dawn on August 18, 2014, and they'll be separated by about 1 degree before dawn on the morning of October 26th.

Sky & Telescope Contributing Editor Fred Schaaf points out that this current string of Venus-Jupiter conjunctions closely resembles a similar series beetween the years 3 and 2 B.C. It has been suggested that their joint appearance might have been what came to be known as the Star of Bethlehem.