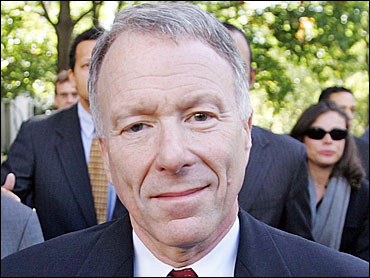 Five government agencies are reviewing classified evidence that I. Lewis "Scooter" Libby may want to use at his trial to fight perjury and obstruction-of-justice charges, according to a court transcript made public Monday.

During a Feb. 3 hearing, Special Prosecutor Patrick Fitzgerald told a federal judge that the review of classified materials is being done by the CIA, National Security Council, National Security Agency, State Department and several components within the White House, including the offices of the president and vice president.

The outcome of those reviews will determine whether the case against Libby, Vice President Dick Cheney's former chief of staff, gets bogged down in a legal battle pitting the government's desire to protect national security secrets against a defendant's right to a fair trial.

Libby, 55, was indicted late last year on charges that he lied about how he learned CIA operative Valerie Plame's identity and when he subsequently told reporters.

Plame's identity was published in July 2003 by columnist Robert Novak after her husband, former U.S. Ambassador Joseph Wilson, accused the administration of twisting intelligence about Iraq's efforts to buy uranium "yellowcake" in Niger. The year before, the CIA had sent Wilson to Niger to determine the accuracy of the uranium reports.

The case against Libby is on two tracks — one public, one secret. U.S. District Judge Reggie B. Walton and lawyers for both sides went into a secret session after a public hearing Feb. 3 to discuss classified evidence that could play a role in the case.

The 11-page transcript released Monday showed that the judge and lawyers didn't discuss anything in the secret session worth keeping from the public.

To speed up declassification of evidence, Walton asked Fitzgerald to ensure that the intelligence agencies send a representative to each court hearing to deal with issues as they come up.

Defense attorney John Cline and Fitzgerald also told the judge that they were working on an agreement that would allow Libby to help prosecutors translate about a hundred pages of his handwritten notes.

Fitzgerald said Libby's notes "by and large cover predominantly topics other than the issue of Mr. Wilson's wife."

Libby's handwriting is difficult to read, the lawyers said, and has slowed down the reviews by the intelligence agencies.

Under the agreement, the lawyers said, Libby would translate his scrawlings but would not be held responsible if he were to make a mistake.

Also Monday, Democratic Party Chairman Howard Dean said that Cheney should resign if he ordered Libby to leak classified information to the media to defend the invasion of Iraq.

On CNN's "American Morning" program, Dean repeated calls he first made Sunday, saying Cheney may have broken the law.

On Sunday, Democratic and Republican senators said Special Counsel Patrick Fitzgerald should investigate Cheney and others in the CIA leak probe if they authorized Libby to give secret information to reporters.

Sen. Jack Reed, D-R.I., called the leak of intelligence information "inappropriate" if it is true, and said, "I think he (Fitzgerald) has to look closely at their behavior."

Sen. George Allen, R-Va., said a full investigation is necessary. "I don't think anybody should be releasing classified information, period, whether in the Congress, executive branch or some underling in some bureaucracy," said Allen, who appeared with Reed on "Fox News Sunday."

The White House has refused to comment on the case.

Dean initially called for Cheney's resignation when he appeared on CBS' "Face the Nation" on Sunday. "I don't think the vice president has any credibility on national security whatsoever, and I think he's in deep trouble," Dean said on CBS.

Court documents do not identify Libby's superiors. But Dean said on CNN, "You only have one superior if you're the chief of staff and that's the vice president."

Dean said releasing classified information is "against the law ... There's a process you have to go through to declassify information. And you certainly don't release it to discredit your political opponents."