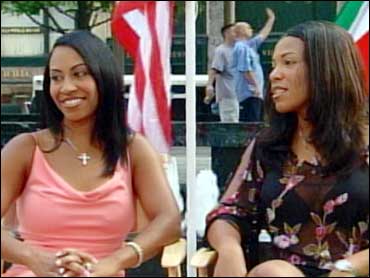 After a picturesque send-off from the historic Dodgers Stadium in Los Angeles, the 12 teams in this season's "Amazing Race" on CBS have trekked through most of Europe, eventually navigating their way to India.

The "NFL wives" team was the sixth to be eliminated from the marathon journey around the world.

After a difficult trip through the streets of Bombay, India, Monica Ambrose, 29, and Sheree Buchanan, 31, arrived at the game's pit stop in last place, which earned them a trip home.

The women said it was disappointing to be eliminated from the show, because they did well in Europe. But their trip through India proved difficult.

"Women are treated as second-class citizens, so it's really hard to adjust," explained Buchanan. "Nobody wants to talk to you. We got blown-off a lot."

The two women also said their Road Block, a game's obstacle that has to be overcome by a team before progressing to the next destination, slowed them down. In this case, one team member had to enter a foul smelling fish market, find a specific vendor and carry 20 Palai fish, from a pile containing several different varieties of local fish, back to the market manager to get their next clue.

"It was excruciating," said Ambrose. "Although Sheree and I had a feeling we were in last place, I still wanted to run and do the fish. But it was really hard when you pick up the fish. [The native] custom is to throw water on you. The fish, everything's dripping on you. You're struggling to carry this fish in this flimsy basket."

Ambrose is married to NFL Saints player Ashley Ambrose. Buchanan is married NFL Falcons football player Ray Buchanan. The women said it was important for them to dispel the myth and image of pampered players' wives.

Ambrose and Buchanan said they came from meager beginnings, and "The Amazing Game" was a humbling experience that reminded them of their roots.

The "NFL wives" said they enjoyed the experience of "The Amazing Race." And, if given the chance, they would participate on the show again.