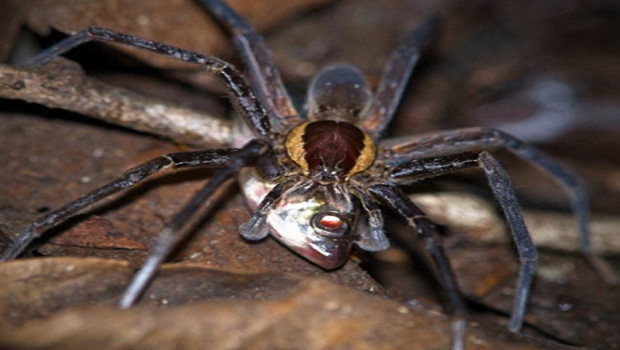 Not all spiders catch their prey by spinning webs; a surprising number of arachnids quite literally fish for their meals, snatching scaly animals sometimes twice their size.

In fact, a new scientific review found that fish-eating spiders lurk near rivers, ponds and swamps on every continent except Antarctica. They've lifted small catfish out of marshes in Ecuador; grabbed killifish out of nets in Cameroon; devoured dwarf fish in California aquariums; and stalked hatchery ponds in Oklahoma, continuing to kill fish even after eating their fill.

Arachnologist Martin Nyffeler, of the University of Basel in Switzerland, and fish ecologist Brad Pusey, of the University of Western Australia, pored over scientific papers, citizen reports and photos from around the world and collected 89 such instances of spiders eating fish. Their review was published today (June 18) in the journal PLOS ONE. [See Photos of the World's Fish-Eating Spiders]

Nyffeler has a history of studying the more exotic tastes of arachnids, which traditionally have been viewed as insectivores. He's previously published papers on earthworm-eating spiders, slug-eating spiders and, most recently, bat-eating spiders. (That last study similarly found that Antarctica is the only place not home to arachnids that eat bats.)

"Rarely, this scattered information is processed and synthesized," Nyffeler said. "Very few scientists look at things from a global perspective."

Until now, only a handful of semiaquatic species from the Pisauridae family (or nursery web spiders) had been recognized as fish eaters, Nyffeler said.

But he and Pusey found that at least 18 different spider species from five families (Pisauridae, Trechaleidae, Lycosidae, Ctenidae and Liocranidae) have been seen catching fish in the wild. Another six species, including creatures from three additional familes (Cybaeidae, Desidae and Sparassidae), have been observed eating fish in lab settings.

Most fish-eating incidents were reported in warmer climates, with a cluster in the Florida wetlands and neighboring regions. All cases involved freshwater fish -- often common ones like mosquitofish or killifish, depending on the region. The largest fish was a 3.5-inch (9 centimeters) goldfish, lifted from a garden pond in Sydney by a clever fishing spider (Dolomedes facetus).

When spiders go fishing, they often adopt an energy-saving, sit-and-wait strategy -- much like how a human fishermen might plop down on a dock with a line and hook.

"The spider typically assumes a position near the water's edge, with the rear pair of legs anchored to some vegetation or wood or rock, and their three front pairs of legs out of the water's surface," Pusey told Live Science in an email.

Then, if a fish's fin or body brushes up against its front legs, the spider plunges in to latch on, biting its prey near the base of the head to inject a surge of deadly neurotoxins, before dragging the fish out of the water.

"It can take many minutes for the fish to die, and it is probably safer for the spider to haul it out of the water to aid in handling and reduce the potential for escape," Pusey said. [Beastly Feasts: Amazing Photos of Animals and Their Prey]

For spiders, the rewards of fishing are great. Much of an insect's weight comes from its hard exoskeleton, which isn't really useful to spiders in terms of food energy. In contrast, fish are made up of mostly muscle, and the only nondigestible parts are their scales, skin and skeleton. What's more, fish-eating spiders, on average, nab fish more than twice their size -- "a big-ticket item," Pusey said.

But the spread of spiders caught preying on fish might be skewed. Relatively few fish-eating spiders were tallied in Africa, Asia, Australia and Europe, the researchers noted. This may be because fewer nature enthusiasts and ecologists have been on hand to observe this behavior in the wild.

In the neotropical region in Central and South America, these incidents were likely underreported because most fish-eating spider species (in the genuses Trechalea and Ancylometes) are nocturnal and live in remote areas, the researchers said. Meanwhile, some fishing spiders may be at risk of vanishing before they're studied.

"In Europe, the only semiaquatic spider seen preying on fish in the wild,Dolomedes plantarius, is found on the IUCN Red List of Threatened Species," Nyffeler said. "Such spiders are endangered because of the fact that the wetland areas in most European countries are shrinking with alarming speed."