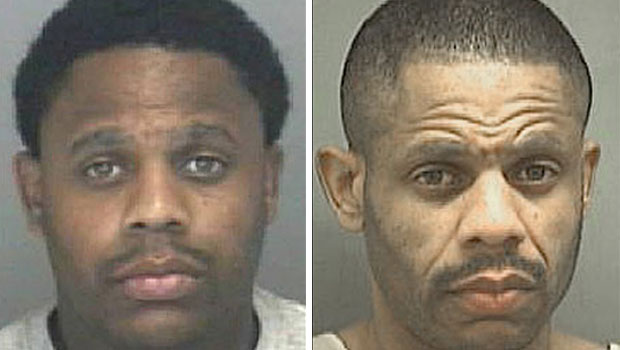 The 39-year-old, of New Haven, Conn., was arrested over a week ago and appeared in court last Monday, after an apparent jailhouse suicide attempt the weekend between.

Both images, obtained first by The Washington Post, are mug shots of Thomas taken 10 years apart. The image on the left is from a June 2001 arrest on domestic assault and battery charges. The image on the right is his recent arrested in connection with the rape case.

Thomas has been charged with one rape in Connecticut and two in Virginia. Investigators say there are 12 attacks with 17 victims, including 14 sexual assaults, two abductions where victims escaped or were not assaulted, and one peeping offense. The attacker often wore a mask and did his work at night or during the evening.

The East Coast attacks started in 1997 in Forestville, Md., with a rapist pulling a gun on a woman and forcing her into the woods, then fleeing on a 10-speed bicycle. Seven months later, a woman was raped behind a restaurant garbage bin in Maryland; the following year a 16-year-old girl was raped, also in Maryland. Then the rapist began attacking women in Virginia before returning to Maryland in 2001, when for the first time he raped two victims in the same attack.

Then for five years, there was no sign of him.

He resurfaced in 2006 in New England, peeping on a girl doing her homework in Rhode Island before her screams scared him off. A year later, someone broke into an apartment and raped the Connecticut woman in front of her baby. Two teenage trick-or-treaters were raped in 2009 in Woodbridge, Va.

Investigators turned to a relatively new, highly detailed police database that includes everything from traffic tickets to arrests, all indexed by time and location. They played around with the search parameters, adjusting the height and weight of the hypothetical suspect. They also set up a website seeking tips and put up electronic billboards with sketches of the suspect.

And on Feb. 28 came a startling tip from Maryland: a caller saying Thomas had taken credit for the first attack in 1997, describing how he was on a bicycle.

Within days, investigators were following Thomas, who was in court in New Haven on a charge of stealing a bicycle. When he discarded a cigarette, investigators picked it up and sent it to a lab. Bingo.

Police arrested Thomas on March 4, just four days after the tip came in, as he walked near his New Haven home, where he lived with his girlfriend and 5-year-old son.

Complete coverage of the "East Coast Rapist" on Crimesider