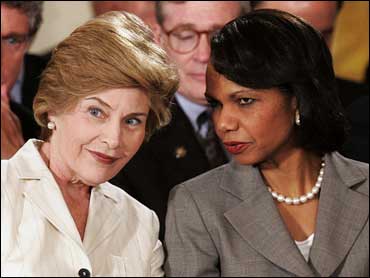 The two most influential women in President George W. Bush's White House - first lady Laura Bush and Secretary of State Condoleezza Rice - are strongly defending the president's legacy against critics who are calling his administration one of the worst in history.

"I know it's not, and so I don't really feel like I need to respond to people that view it that way," Mrs. Bush said in an interview that aired Sunday. "I think history will judge, and we'll see later."

Rice took a similar view in a separate interview, saying that claims that the Bush administration has been one of the worst ever are "ridiculous."

"I think generations pretty soon are going to start to thank this president for what he's done. This generation will," Rice said.

"Because I think the fact that we have really made foreign assistance not just an issue of giving humanitarian aid or giving money to poor people, but really insisting on good governance and fighting corruption," she said. "I think the fact that this president has laid the groundwork for a Palestinian state, being the first president, as a matter of policy, to say that there should be one, and now, I think, laying the foundation that's going to lead to that Palestinian state - I can go on and on."

In her interview, Mrs. Bush called the shoe-throwing incident in Baghdad an "assault." She rebuffed Bush administration critics who contend the U.S. turned its military might and resources to the war in Iraq before finishing the job in Afghanistan.

Mrs. Bush noted that under her husband's watch, the U.S. toppled Saddam Hussein and liberated millions of people in Afghanistan and Iraq from oppressive governments. She also highlighted the president's work to provide treatment for diseases like AIDS and malaria to millions of people in sub-Saharan Africa. She said her husband responded to the Sept. 11, 2001, terrorist attacks in a way that has kept the nation safe.

Mrs. Bush said that while the president laughed it off when an Iraqi reporter threw his shoes at him during a news conference earlier this month in Iraq, she was not amused. The president deftly dodged the shoes and wasn't hit. He continued the news conference with Iraqi Prime Minister Nouri al-Maliki after security officials dragged the journalist from the room.

"The president laughed it off," she said. "He wasn't hurt. He's very quick. As you know, he's a natural athlete and ducked it. But on the other hand, it is an assault. And I think it should be treated that way. And I think people should think of it that way."

On the other hand, she said the incident reflects change in Iraq.

"As bad as the incident is, in my view, it is a sign that Iraqis feel a lot freer to express themselves," she said.

Mrs. Bush challenged critics who contend that Iraq was a distraction from the U.S. mission in Afghanistan, where heightened violence is causing renewed instability.

"Well, I don't know that I would agree with that at all," Mrs. Bush said. "I don't think that's true at all. We've stayed very, very invested in Afghanistan. Not as invested militarily, maybe, and maybe that's what the critics say, that it should have been more military. But I think we stayed very invested."

Rice said it won't be long before Bush's contributions to the world will be acknowledged.

Rice noted that while Germany was reunified in 1990, the work that made it possible was done in the 1940s, "when things didn't look quite so rosy." So historians who are now making judgments about the Bush administration and its Middle East policies aren't very good historians, Rice said.

"One cannot yet judge the effects of decisions that this president has taken on what the Middle East will become," Rice said. "I mean, for goodness' sakes, good historians are still writing books about George Washington."