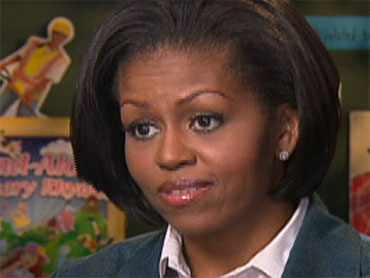 First lady Michelle Obama celebrated Dr. Seuss' birthday Tuesday by reading "The Cat in the Hat" to a group of children wearing red-and-white-striped stovepipe hats like the book's main character's.

Mrs. Obama helped kick off the National Education Association's 13th annual "Read Across America" celebration at the Library of Congress. The event marked the day that Dr. Seuss, or Theodor Seuss Geisel, would have turned 106.

"Do you know the president of the United States reads all the time," Mrs. Obama told a group of more than 200 students from elementary schools in Washington and Arlington, Va. "Our girls at home read every single night."

The first lady said that her daughters, Sasha and Malia, are allowed to stay up 30 minutes later if they are reading.

Some of the first family's favorite children's books are "Horton Hatches the Egg," by Dr. Seuss and "Where the Wild Things Are," by Maurice Sendak, Mrs. Obama said in response to one of the children's questions.

NEA President Dennis Van Roekel led the children in a rhyming pledge to read every day. It began: "I promise to read each day and each night. I know it's the key to growing up right."