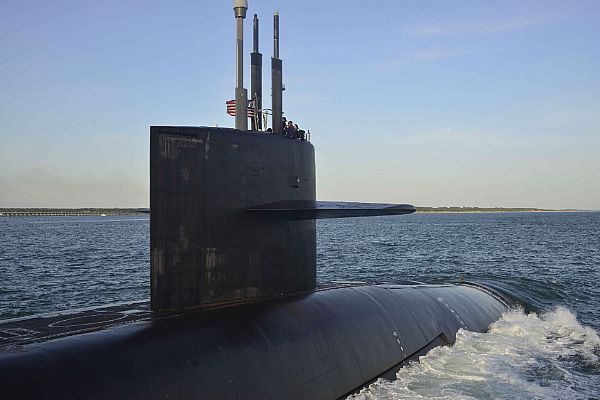 WASHINGTON D.C. -- For the first time an enlisted female sailor has earned her submarine qualification, U.S. naval officials said, as she joined the growing number of women who are in the Navy's "silent service."

Chief Petty Officer Dominique Saavedra received her silver dolphin pin in a ceremony Tuesday at Puget Sound Naval Shipyard in Bremerton, Washington. She will be deploying on a nuclear-powered guided missile submarine, the USS Michigan.

The first female enlisted sailors began training for submarine duty about a year ago. In addition to Saavedra, there are about three dozen other enlisted women assigned to submarines, working to get their qualifications. To become qualified, Saavedra, who is a cook, had to show proficiency and knowledge about all aspects of submarine systems.

"I couldn't be more proud to wear the 'dolphins,'" said Saavedra, in a prepared statement. "To have earned the respect of my fellow submariners is more rewarding than expected."

She earned her qualifications aboard the USS Ohio because the USS Michigan has been in port for maintenance, including modifications to living quarters in order to accommodate female chief petty officers and enlisted crew members. It is expected to set sail for the first time with female crew later this year.

The Navy ended a ban on women serving aboard submarines in 2010 and began integrating crews by first introducing female officers, who already have been assigned to ballistic-missile and fast-attack submarines. The ballistic-missile submarines make up the sea-based leg of the U.S. nuclear triad. The other two segments are the bomber aircraft and the land-based intercontinental ballistic missiles.

According to the Navy, the goal is to have enlisted women will make up about 20 percent - or roughly 29 - of each Ohio-class submarine crew.

Applications for the next round of training for enlisted women will begin in October, and those selected would serve aboard the USS Ohio.

A survey sent to more than 50,000 enlisted female sailors early last year found there was significant but not overwhelming interest in submarine duty. Of the 12,700 sailors who participated, 28.5 percent indicated they would be open to volunteering for submarine service.

The Navy has been at the forefront of the Pentagon's move to open all military jobs to women. After several years of study and planning, Defense Secretary Ash Carter formally declared all combat jobs - even the most grueling commando posts -- open to women last December.