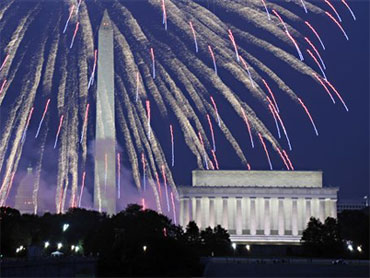 The nation's largest fireworks show lit up the skies in a burst of red, white and blue over the Hudson River straddling New York and New Jersey on Sunday, a scene that was being repeated in hundreds of communities in a sizzling end to a scorching day for much of the U.S.

"It's amazing on TV," said Marcos Jimenez, a golf caddy who joined thousands of others lining the riverfront for a prime view of the show. "I figured seeing it live would be even better."

Budget cuts forced some communities to pull the plug on the pyrotechnics, but the gigantic Macy's fireworks show went on as planned on Manhattan's West Side, where it moved in 2009 after eight years on the East River.

Ten-year-old Nathan Felde of Folsom, Calif., watched with his parents and 6-year-old brother, Elijah, who screamed at the sight of a glowing red circle with a blue ring around it.

The show, which aired live on NBC, began just before 9:30 p.m. with huge fireballs exploding in the night sky to the strains of patriotic tunes like "Stars and Stripes Forever" and "The Battle Hymn of the Republic."

Austin Noon, 12, of Ontario, Canada, said his favorite firework was one that looked like a face, with a red circle, two dots for eyes and a smile.

His mother, Janet Noon, said the family often comes to the United States for the Fourth of July. "It's so festive, we had a lot of fun," Noon said. "We like to crash birthday parties."

The shimmering fireworks that streaked across the night sky replaced a blazing sun that broiled nearly everywhere east of the Mississippi with temperatures in the 90s.

In Washington, vendors with stocked coolers hawked "cold," "ice cold," and even "super cold" bottles of water along Constitution Avenue. There was a long line for watermelon - $3 for a huge wedge - and near the Washington Monument, firefighters and U.S. Park Police officers sprayed hoses into the crowd.

In Bellevue, Iowa, a 60-year-old woman was killed and at least 23 other people were injured at a parade after two runaway horses pulling a wagon took off, running into spectators along the streets, police said. Four of the victims were critically injured.

In New York, American Joey Chestnut won the annual Nathan's Hot Dog Eating Contest on Brooklyn's Coney Island for the fourth straight year, but one of his biggest rivals tried to crash the celebration and was taken into custody.

Six-time champion Takeru Kobayashi, who has not signed a contract with Major League Eating to be free to compete in contests sanctioned by other groups, went on stage after the competition. Police officers grabbed him, and he tried to hold onto police barricades as they took him into custody.

In Washington, thousands gathered on the National Mall were treated to 17 minutes of fireworks, shot off behind the Washington Monument. Thousands of visitors sat on the steps of the U.S. Capitol for the July 4 concert, featuring David Archuleta, Reba McEntire and the National Symphony Orchestra.

The Obama family celebrated the holiday by hosting members of the military and their families for a barbecue, concert and a view of fireworks on the South Lawn of the White House.

"Michelle and I couldn't imagine a better way to celebrate America's birthday than with America's extraordinary men and women in uniform and their families," President Barack Obama told the guests.

Vice President Joe Biden arrived in Iraq on Saturday evening for the holiday weekend, his second visit there this year, and attended a citizenship ceremony at one of Saddam Hussein's former hunting lodges.

Festivities in Philadelphia, where the Declaration of Independence was adopted on July 4, 1776, will conclude Monday after 11 days of parades and concerts. The Goo Goo Dolls headlined a free concert on Sunday night, followed by a fireworks show.

There will be more than 40 firework displays in Los Angeles. One of the largest in the area is held at the Rose Bowl in Pasadena. Fire crews have spread fire retardant on the nearby hillsides to prevent sparks from igniting brush fires.

Chicago traditionally celebrated a day early on July 3 with a fireworks display that drew more than 1 million people, but the show was canceled this year to save at least $500,000. The city held three smaller shows on Sunday.

In Seattle, local businesses and individuals donated the $500,000 needed for the city's 20-minute fireworks show, in which 3 tons of explosives will be set off over Lake Union.

In Durango, Colo., the fireworks display will go on thanks to embattled oil giant BP.

The company stepped forward in December to pay for the fireworks show, five months before oil began spilling from the spot in the Gulf of Mexico where one of the company's rigs exploded.

City officials were poised to cancel the $15,000 show because of a budget crunch but BP, which drills for natural gas in Colorado, offered to pick up the tab.

Throngs of people celebrated Independence Day on the banks of the Charles River in Boston.

The festivities included a traditional concert by the Boston Pops, highlighted by a usually stirring rendition of the "1812 Overture." Country music star Toby Keith is a guest performer at this year's concert.

Several roads around the Charles River Esplanade were closed on Sunday, including portions of Storrow Drive in Boston and Memorial Drive on the Cambridge side of the river. The Longfellow and Massachusetts Avenue bridges were also closed to traffic after 4:30 p.m.