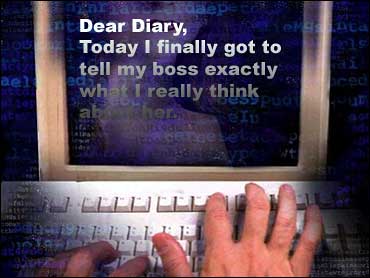 Flight attendant Ellen Simonetti and former Google employee Mark Jen have more in common than their love of blogging: They both got fired over it.

Simonetti had posted suggestive photographs of herself in uniform, while Jen speculated online about his employer's finances. In neither case were their bosses happy when they found out.

"There needs to be a dialogue going on between employers and employees," said Heather Armstrong, a Web designer fired for commenting on her blog about goings on at work. "There's this power of personal publishing, and there needs to be rules about what you can or cannot say about the workplace."

On blogs, which are by their very nature public forums, people often muse about their likes and dislikes — of family, of friends, of co-workers.

Currently, some 27 percent of online U.S. adults read blogs, and 7 percent pen them, according to The Pew Internet and American Life Project.

With search engines making it easy to find virtually anything anyone says in a blog these days, companies are taking notice — and taking action.

"Because it's less formal, you're more likely to say something that would offend your boss," said Lewis Maltby, president of the National Workrights Institute, a workers' rights group.

Armstrong, who wouldn't name the company that fired her in 2002, said some of her bosses took issue with such posts as "Comments Heard In, Around, and Consequent to the Company Christmas Party Last Evening."

Soon after she was sacked, sympathizers coined the term "dooced," meaning "to have lost one's job because of one's Web site," in her case dooce.com.

In 2003, a Microsoft Corp. contractor was fired after posting photographs of computers from rival Apple Computer Inc. at a loading dock. Because Michael Hanscom had described a building in his posting, Microsoft said he had violated security, he said.

Last fall, Simonetti posted photographs of herself posing in a Delta Air Lines uniform inside a company airplane, her bra partly revealed in one. She was fired weeks later.

And in January, Jen was fired by Google over a blog that discussed life at the company, even though he said "it's all publicly available information and my personal thoughts and experiences."

Upon reflection, Jen said, he understood Google's concerns, given readers' tendencies to read between the lines and draw conclusions based on "random comments I made."

He said he hoped his case would prompt workers to "talk to their managers at length about blogging before they begin."

Simonetti said she still doesn't know what she did wrong, saying that plenty of employee Web sites and dating profiles identify Delta and include photos in uniform.

"If there is a policy against this, why weren't all these people punished before?" she said.

Delta and Google officials would only say that Simonetti and Jen no longer worked for them.

In 1997, blogging pioneer Cameron Barrett lost a job at a small marketing firm in Michigan after co-workers stumbled upon "experimental" short stories from his creative writing class on his site. Now, he's much more cautious, and he suspended his blog while campaigning for Wesley Clark during the Democratic presidential primaries.

"I knew that everything I wrote would be scrutinized at (a) microscope level by the other campaigns and their supporters," Barrett wrote in an e-mail.

The First Amendment only restricts government control of speech. So private employers are free to fire at will in most states, as long as it's not discriminatory or in retaliation for whistle-blowing or union organizing, labor experts say.

A few companies actually do encourage personal, unofficial blogs and have policies defining do's and don'ts for employees who post online. They recognize that there can be value in engaging customers through thoughtful blogs.

"There's always a risk, but you always have that risk anytime you put an employee on the phone," Forrester Research analyst Charlene Li said.

Only in rare cases are employees "unofficially asked to soften some wording," said Tim Bray, the Sun policy's chief architect. Rather, he said, the policy creates a structure for discussions between employees and their managers.

Jeff Seul, general counsel at Groove Networks Inc., said the policy he wrote for his company aims to tolerate dissent but not disrespect.

Microsoft refused to comment on Hanscom's case, but pointed out that it encourages blogging and has more than 1,500 unofficial bloggers — the bulk on Microsoft's official Web sites.

But some experts question whether a separate blogging policy is needed at all, given more general employment guidelines and common sense.

Anil Dash, vice president at blog software developer Six Apart Ltd., said publicized firings have been generally not over blogging but over other violations that happened to be done through blogging.

Mark Dichter, chairman of labor and employment at the law firm Morgan, Lewis & Bockius LLP, said policies can tie the hands of employers.

"It requires you to anticipate and draw lines," he said, "and once you set policies then you get into litigation into which side of the line it fell."