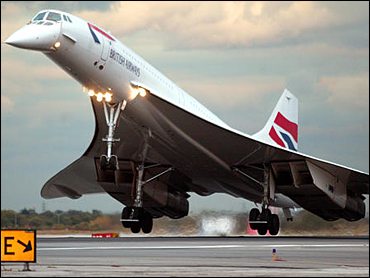 The Concorde soared into the sky on its last regular passenger flight Friday, heading for London as the world bid adieu, cheerio and farewell to the era of supersonic travel.

The plane, carrying about 100 passengers, was scheduled to land in London's Heathrow Airport three hours and 20 minutes later. Thousands gathered to watch the near-simultaneous landing of the flight from New York and two other Concordes — one carrying competition winners from Edinburgh, Scotland, the other taking guests on a circular flight from Heathrow over the Bay of Biscay, west of France.

"It's been a wonderful achievement," said Ross Stainton, the former chief of the predecessor to British Airways, before boarding the London flight.

Stainton, who was with the British Overseas Airways Corp. when the Concorde was developed and was aboard its debut flight, said he was "very sad, but also very proud."

The Concorde, a joint project of the British and French governments, began commercial service in January 1976. The technological marvel flew 11 miles above the Earth at up to 1,350 mph, crossing the Atlantic in about 3 1/2 hours. With the five-hour time difference, passengers arrived in New York earlier than they had left London.

The British and French hoped to sell hundreds, but in the end only 16 were built. They were used by British Airways and Air France.

Last April, both airlines announced they would be retiring the Concorde. Air France had its last flight in May.

Despite the glamor and social cachet attributed to the plane, which resembles a giant eagle poised to pounce on prey, it was a financial dud. With fares of more than $9,000 for a trans-Atlantic round trip — well above the first-class fare on a Boeing 747 — it remained a luxury for a wealthy few.

"Nobody will think about whether it was a commercial success or not," shipping company chairman Lord Sterling said before the flight. "They will say this is another frontier which the human race has broken through."

"I couldn't resist one more chance to just pop over to London," Brinkley said before boarding.

The man at the controls was Capt. Michael Bannister, British Airways' chief Concorde pilot, who estimated he had logged 8,000 hours and about 8 million miles — the equivalent of 16 round trips to the moon — since he began flying the supersonic jets in 1997.

"There's a little sadness," Bannister said in a telephone interview on the eve of his flight. "What we've tried to do is make the retirement of the Concorde a celebration. It's something we'd like to do with the style and grace and elegance befitting this majestic aircraft."

The beginning of the end for the Concorde came when an Air France Concorde crashed after takeoff from Paris on July 25, 2000, killing 113 people. Investigators blamed the accident — the only crash in Concorde history — on pieces of a punctured tire that flew into the fuel tank and started a fire.

The jets were grounded for more than a year and overhauled. They returned to service just two months after the Sept. 11 terrorist attacks, in the middle of one of aviation's worst slumps. With ticket sales weak, the planes quickly became a heavy financial burden.

Not everyone was lamenting the Concorde's final takeoff from JFK. A congressman who has complained about airport noise was planning a champagne toast at a Queens park to mark the end of the planes' sonic booms.

"The last flight of the Concorde may be chock full of celebrities, but the celebrating will be right here on the ground," Rep. Anthony Weiner said. "At long last we will all be rid of this headache."

British Airways said it would make an announcement next week about the fate of its seven Concordes. Most are expected to go to museums.