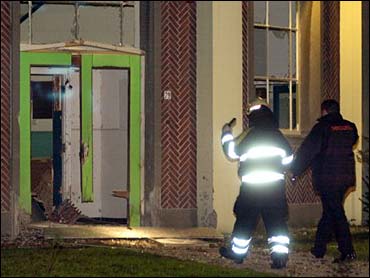 Suspected arsonists set an Islamic elementary school on fire Tuesday in the latest in a string of arson attacks in the Netherlands. The attacks come in the wake of the killing of a Dutch filmmaker, allegedly by an Islamic extremist.

Firefighters struggled Tuesday night to put out the fire at the burning Bedir school in the southern town of Uden, where someone had scrawled "Theo rest in peace" in the building in homage to slain filmmaker Theo van Gogh.

Uden Mayor Joke Kersten told Dutch television she didn't know the exact cause of the fire but suspected arson. She said the school had not been the target of prior attacks.

Overnight, arsonists attempted to burn down two Protestant churches, in Utrecht and Amersfoort, in apparent retaliation for the bombing of a Muslim elementary school in Eindhoven on Monday, police said.

Muslim sites have been targets of a half-dozen attacks in the past week. A suspected bomb blew the front door off a Muslim elementary school in a southern Dutch town on Monday, days after a suspected Muslim radical allegedly killed a Dutch filmmaker, police said. No injuries were reported.

Television news footage showed the burned-out entrance of the school, which was empty at the time of the 3:30 a.m. attack. Windows across the street were shattered.

The Tarieq Ibnu Zyad Islamic school, said to have links with a mosque that has allegedly been a gathering place for radicals, also suffered a minor attack a year ago. Dekkers said police had visited Islamic schools in the city but had not decided on additional security measures.

Eight suspected Islamic extremists have been arrested in connection with the slaying of Van Gogh, who earlier this year released a film critical of how women are treated under Islam. Among those arrested was a 26-year-old accused of killing the filmmaker, identified as Mohammed Bouyeri.

The government had been in contact with local authorities to assess the need for security following Van Gogh's slaying, said Frank Wassenaar, spokesman for the Internal Ministry. Asked if national authorities would take measures following the school explosion, he said: "There is no indication that local police cannot deal with this themselves."

Van Gogh's killing sparked a series of apparent revenge attacks and vandalism over the weekend, including two attempts to burn down mosques. Dutch Interior Minister Johan Remkes has said Van Gogh's death should not be blamed on the Muslim community as a whole.

Although mainstream Muslim groups condemned Tuesday's killing, it has caused an outpouring of anger in the Netherlands. The killer left a five-page note quoting from the Quran and threatening more attacks against Dutch politicians.