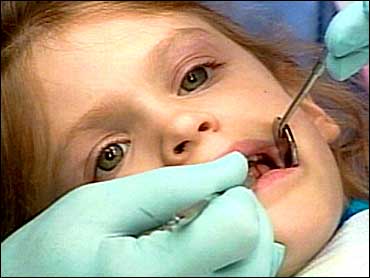 The paste was developed by researchers including Kazue Yamagishi, DMD, from Japan's FAP Dental Institute. Their report appears in the Feb. 24 issue of the journal Nature.

Ordinarily, dental cavities are fixed by removing the decaying part of the tooth and adding a filling. But that strategy is overkill for fledgling cavities, say the researchers. In cavities' earliest stages, tooth decay is microscopic. It doesn't make sense to use fillings in those cases because too much of the healthy tooth would have to be removed to help the filling stick, say Yamagishi and colleagues.

In time, continued erosion weakens teeth, and fillings become necessary. Later, root canals or crowns may be needed when the fillings wear out. Tooth loss even can occur.

The new dental paste stops that process before it snowballs. The white crystalline paste chemically and structurally resembles tooth enamel. It successfully repaired an early cavity lesion in a lower premolar tooth, the researchers report.

It took 15 (drill-free) minutes to use the paste to seal the tooth's affected area. Examination showed the paste fit right in, integrating with the tooth's enamel.

The researchers also compared a repair done with fluoride solution, an alternative treatment for early cavities. The fluoride solution covered the tooth enamel, but its thickness varied, and it left a gap at the border of the tooth's treated and untreated regions.

The paste left no gap and kept the treated enamel's thickness even, say the researchers. The paste can fix early cavities and strengthen natural enamel, helping to prevent cavities from returning to the same area, they say.

The paste would be used in practice and shouldn't come in contact with the gums. Its acidity and high concentration of hydrogen peroxide could cause inflammation of the gums, say the researchers. Other materials with similarly aggravating potential are already used on patients, they note.

It could be a while before your dentist stocks the paste. For now, your best bets to avoid the drill are brushing and flossing your teeth, eating healthfully, and getting regular dental care.