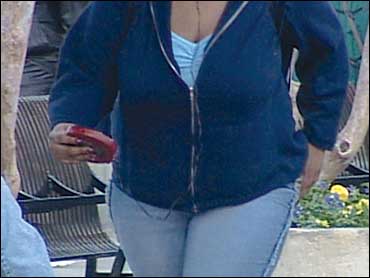 Fight fat with fat? The newest obesity theory suggests we may one day be able to do just that.

Just like good and bad cholesterol, there apparently are good and bad types of body fat. Scientists until recently believed this good fat, which spurs the body to burn calories to generate body heat, played an important role in keeping infants warm but by adulthood was mostly gone or inactive.

Everyone is born with brown fat. Scientists thought it disappeared after infancy but for the first time, studies have used sophisticated imaging technology to prove brown fat is active in adults, reports CBS News medical correspondent Dr. Jon LaPook.

The studies - from researchers in Boston, Finland and the Netherlands - show that this good fat affects metabolism and potentially offers a target to help people shed pounds.

Dr. Francesco Celi, an endocrinology and metabolism researcher at the National Institute of Diabetes and Digestive and Kidney Diseases, said the studies show this fat burns large amounts of energy.

"So it could be used as a target" for a pill that would somehow rev up the fat, he said.

Dr. Louis Aronne, former president of The Obesity Society and a weight control expert at Weill Cornell Medical Center in New York, said the findings are the most conclusive evidence so far of the role of such fat in regulating body temperature and weight.

"I don't want to use the word 'exercise-in-a-pill,' but it's doing something (that's) getting rid of calories," he said, adding that any obesity treatment developed around the fat could be a potential treatment for diabetes as well.

The studies were published in Thursday's New England Journal of Medicine.

The good fat is actually brownish, while the more predominant bad fat is white or yellow. Brown fat is stored mostly around the neck and under the collarbone. White fat tends to concentrate around the waistline, where it stores excess energy and releases chemicals that control metabolism and the use of insulin.

All three research groups documented the presence and activity of the brown fat by examining tissue samples from some patients and using high-tech imaging that indicated how much sugar, and therefore calories, the fat burned.

One group from Joslin Diabetes Center, Harvard Medical School, and three hospitals in Boston looked at scans done on nearly 2,000 patients to diagnose various health problems. The other two groups scanned small numbers of patients, first at room temperature and then after a couple hours in mild cold, about 60 degrees.

Here's what the scientists learned about brown fat: