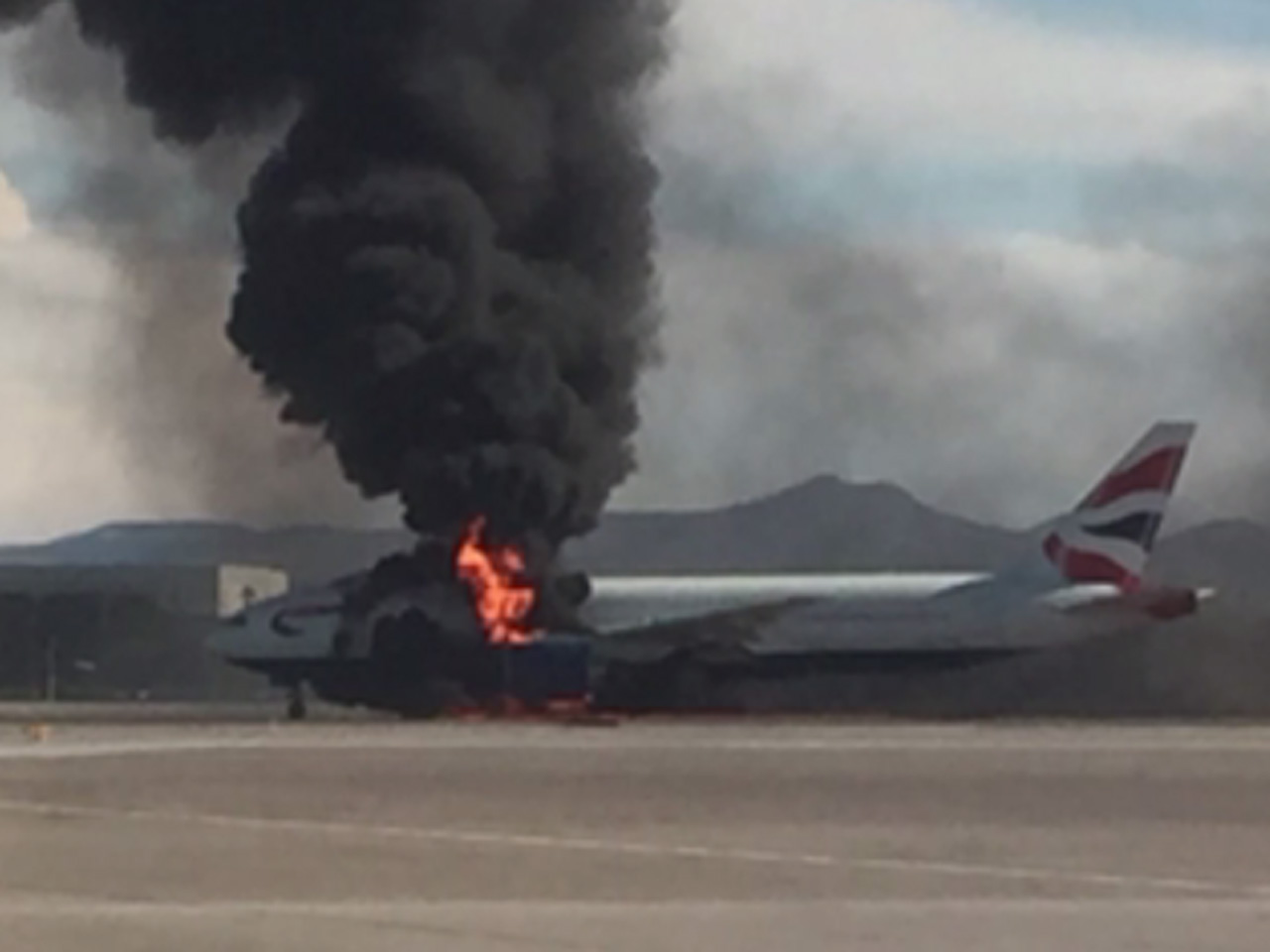 LAS VEGAS -- An engine on a London-bound British Airways jet caught fire Tuesday while the plane was preparing to take off from Las Vegas, shooting flames from the side of the jet and forcing passengers to escape on emergency slides.

Billowing black smoke and orange flames could be seen pouring from under the plane's wings, sending passengers fleeing quickly from the aircraft and across the tarmac before about 50 firefighters doused the flames in minutes.

British Airways said late Tuesday that 157 passengers, not 159 according to earlier reports, were on board Flight 2276 in addition to 10 crew members and three pilots.

All were able to get off the plane, McCarran International Airport spokesman Chris Jones said.

Fire officials said 14 people were taken to Sunrise Hospital by early Tuesday evening for minor injuries, most a result of sliding down the inflatable chutes to escape.

Some crew members were among them, British Airways spokesperson Caroline Titmuss told CBS News in an email exchange.

She didn't answer questions about the fire but said "safety is always our priority," adding that the carrier would provide passengers with hotel rooms.

The Federal Aviation Administration delayed flights to Las Vegas from some airports for more than two hours after the fire to slow the flow of planes while the disabled Boeing 777 made the runway inaccessible. It reopened early Wednesday.

Reggie Bugmuncher, of Philadelphia, said she was charging her phone and waiting at a gate for her flight when she heard people saying, "Oh, my God." She looked out the window and could see "bursts of flames coming out of the middle of the plane."

"Everyone ran to the windows and people were standing on their chairs, looking out, holding their breath with their hands over their mouths," Bügmüncher said.

The plane's emergency slides were deployed a few moments later and passengers quickly got off.

She said it was a "bit more orderly" than she would have expected, given the dramatic nature of the fire and smoke.

"I was one of the first people off the plane, jumped on the slide, and the flames seemed to be twice the height of the aircraft," he said. "This was before the fire trucks arrived. They also came very quickly. They were probably only about 150 meters away whenever I was moving away from the flames."

Another passenger told the station, "I opened up the cover of my window and just saw flames on the engine."

"We just heard the captain say, 'This is an emergency. Evacuate. Evacuate,"' yet another passenger said.

"It was scary, yeah," one passenger remarked to KLAS. "It was just shocking more than anything else."

Firefighters stationed at the airport reached the plane two minutes after getting reports of flames, and within another three minutes, everyone inside had escaped.

After firefighters extinguished the flames, emergency vehicles could be seen surrounding the aircraft, which was left a sooty gray from the smoke and fire retardant.

FAA spokesman Ian Gregor said the left engine of the twin-engine plane caught fire. The National Transportation Safety Board was collecting information about the incident, said Eric Weiss, a spokesman for the agency in Washington.

Clark County Deputy Fire Chief Jon Klassen said the cause of the fire wasn't clear yet, but the fire didn't appear to breach the cabin.

The Boeing 777-200, popular with airlines for its fuel efficiency for long-haul flights, was bound for Gatwick Airport near London.

In its 21-year history, the 777-200 has been involved in three fatal incidents: one in July 2013 that killed three passengers when an Asiana Airlines flight landed short of San Francisco International Airport's runway; Malaysia Airlines flight MH370, which disappeared last year (a piece of its debris was recently recovered on an Indian Ocean island); and Flight MH17, which was shot down over Ukraine.

Las Vegas' airport is the ninth-busiest in the U.S. and had nearly 43 million passengers last year. The airport has been taking steps to accommodate more international travelers seeking direct flights to Europe and Asia, including adding new gates to accommodate wide-body double-decker jets.