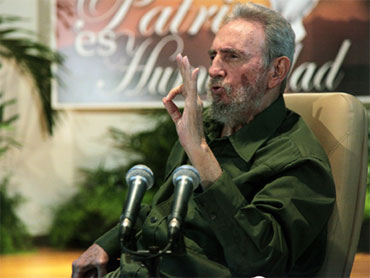 CBS News' Portia Siegelbaum reports that video just broadcast on the evening TV news in Cuba shows Fidel Castro at the monument to national hero Jose Marti in Havana's Revolution Square, a stone's throw from his old office in the Council of State building. Castro was for the second time in less than a week dressed in an olive green shirt reminiscent of his old military uniform.

The news report said after paying homage to Marti in this morning, Castro, who will be 84 in less than three weeks, met with artists, musicians, members of parliament and Pastors for Peace, a group of Americans who traveled to Cuba this week in defiance of the U.S. travel ban. The group brought donations of computers, school and medical supplies to the island, according to the report. In a short video clip from this meeting, Castro could be seen sitting in a large room addressing dozens of people.

Siegelbaum reports that a Cuban newscaster said that Castro told the group assembled he would shortly be publishing a book on some of his experiences during the war to oust Batista and that there would be a blog written by him on the web Tuesday. He also said that Castro has spoken with the group about the BP oil spill and that a blog on that subject would be posted on August 3.

Earlier in the day, a B-team of socialist speakers spent Cuba's Revolution Day bashing the United States for everything from its drug consumption to the war in Iraq to its military support for Colombia, portraying Washington as the great villain in world affairs.

But the day was more notable for who didn't address the crowd — President Raul Castro never took the lectern, brother Fidel Castro was a no-show and Venezuela's Hugo Chavez canceled his trip to Cuba altogether. It was the first Revolution Day in memory in which neither Castro spoke, leaving some in the crowd and on Cuba's streets disappointed and perplexed. No reason was given.

The Castros often use July 26 — the most important date on Cuba's calendar — to set the agenda for the coming year and announce major changes. A spate of public appearances by the 83-year-old Fidel after years of seclusion had fueled speculation he would be onstage with his younger brother and possibly even address his compatriots.

That neither man spoke was a surprise, particularly since Cubans have much they are waiting to hear from their leaders, together in power for more than half a century.

The country is in the grips of a painful economic downturn, and there have been increasing warnings from intellectuals that corruption is eating away at the revolution's foundations. Raul Castro has made halting efforts to open the economy, while exhorting Cubans to work harder and stop depending on the state for everything.

The government is also in the midst of fulfilling a pledge to release 52 political prisoners jailed since 2003, a major concession that has some hoping more change might be on the way. But none of the speakers brought up the dissidents on Monday, in keeping with the government's position that they are mercenaries and common criminals not worthy of mention.

Tens of thousands of people filled the plaza in the central city of Santa Clara in front of a huge bronze statue of gun-toting revolutionary Ernesto "Che" Guevara. Many in the crowd wore red T-shirts bearing his likeness or other homages to the revolution.

They got speeches by local party bosses interspersed with music, poetry readings and chants of "Long live the Revolution!"

Vice President Jose Ramon Machado Ventura gave the main speech, saying Cuba must tighten its belt and make changes to the closed economy — but will not be pushed to move too quickly.

"Savings, reduction of costs and the maximum rationing of energy and resources are our urgent needs in all areas," he said, adding that the country is taking a step-by-step approach to transforming its economy. "We will never accept outside pressure."

While neither of the Castros played much part in Monday's event, both made separate appearances elsewhere later in the day. Fidel kept up a string of impromptu stop-ins by laying a wreath at a memorial to Cuban independence hero Jose Marti at Havana's Revolution Plaza and later met with Cuban artists and intellectuals. Raul appeared on Venezuelan and Cuban television discussing new economic ties with Venezuela and saying Cuba stands with its ally in its dispute with Colombia.

As in a weekend appearance, Fidel wore an olive-green shirt that was reminiscent of the military uniform he was once famous for. At Santa Clara, Machado hailed the reemergence of Fidel as giving his countrymen hope.

"The visible recovery of our commander in chief is a point of pride and makes all revolutionaries happy today," he said.

Machado and others decried Washington's 48-year-old trade embargo against Cuba and accused the United States of imperialist intentions in Latin America and the world.

Venezuela's Chavez was scheduled to attend as a guest of honor, but canceled at the last minute due to a diplomatic conflict with neighboring Colombia. In his place he sent Energy Minister Ali Rodriguez, who blamed the United States for the confrontation between Caracas and Bogota.

Chavez cut off diplomatic relations with Colombia after outgoing President Alvaro Uribe's government presented photos, videos and maps of what it said were Colombian rebel camps inside Venezuela. Chavez called it an attempt to smear his government and said Uribe could be trying to lay the groundwork for an armed conflict.

In his speech Monday, Rodriguez also spoke of drug problems among America's youth, the global economic meltdown, the war in Iraq, U.S. support for Israel and American military backing for Colombia.

"There is a crisis in global capitalism, and when these systems are in crisis they start to generate violence," Rodriguez said.

Cubans said they were disappointed that the Castros didn't speak — Raul limited himself to awarding plaques and flags to local officials and politely clapping as others took to the stage. Nobody could remember a past Revolution Day where neither man took the podium.

"It is unbelievable ... something out of science fiction. They left everyone in the lurch," said Juana Perez, a 58-year-old retiree reading a newspaper in a park in Old Havana.

She added, however, that she had little hope either man would have offered a solution to the country's woes. "After 50 years, most people couldn't care less" what they have to say."

Even in the crowd in Santa Clara, made up of partisans hand-picked for the occasion, some said they were surprised.

"Yes, I would have liked it if he (Fidel) were present, or to have heard Raul speak," said Maria Teresa Tapans. "But the people are still with them."

Revolution Day commemorates July 26, 1953, when the Castros led an attack on the Moncada army barracks in the eastern city of Santiago and a smaller military outpost in the nearby Bayamo. The operation failed spectacularly, but Cubans consider it the beginning of the revolution that culminated with dictator Fulgencio Batista's ouster on New Year's Day 1959.