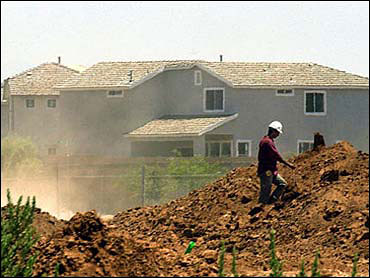 Strapped by the nation's economic crisis, fewer Americans are migrating to Sun Belt hot spots in Nevada, Arizona and Florida, instead staying put for now in traditional big cities.

Census data released Thursday highlight a U.S. population somewhat locked in place by the severe housing downturn and economic recession, even before the impact of rippling job layoffs after last September's financial meltdown.

The population figures as of July 2008 show growth slowdowns in once-booming metropolitan areas such as Atlanta, Las Vegas, Phoenix and Tampa, due mostly to a rapid clip of mortgage foreclosures as well as frozen lines of credit that made it harder for out-of-staters to move in.

"It's the bursting of a 'migration bubble,"' said William H. Frey, a demographer at the Brookings Institution think tank who analyzed the numbers. "Places that popped up in migration growth in the superheated housing markets earlier in the decade are now just as quickly losing their steam."

"It's the constraint of not being able to buy or sell a home that is keeping people from moving long distances," he said.

The latest population trends come as state and local governments are deciding where to pour billions of dollars in federal stimulus money to develop schools, roads, bridges and other infrastructure. The nation's decennial head count, used to apportion House seats and redraw congressional districts, also is fast approaching.

Las Vegas, known for its warm climate and wide spaces, had its smallest annual population gain in nearly 20 years.

Despite its pricier housing market, San Francisco was back to its heyday growth of the 1990s, having formerly shriveled when the tech boom went bust in 2000.

Economists explain that because housing in San Francisco was so expensive for so many years, only the wealthy were able to buy. As a result, the area was less affected by mortgage foreclosures than other cities. San Francisco's tech industry also has been slower to lose jobs so far in the current recession, but officials aren't sure how long that will hold up given California's double-digit unemployment.

California had the biggest net loss from people moving to other states. The declines in its interior regions put it at risk of losing a House seat. Los Angeles had major gains, but partly at the expense of Riverside, a sprawling exurb nearby.

In the months ahead, jobs are expected to be a growing factor in U.S. migration.

The population in the nation's distressed counties, or areas with unemployment rates of 6 percent or higher in 2007, grew by 0.3 percent, compared to a 1.2 percent growth rate in areas with relatively low unemployment.

The overall nationwide growth rate was 0.9 percent, according to the Population Reference Bureau.

In Michigan, where the struggles of the auto industry led to the nation's highest unemployment rate, 60 of the state's 83 counties lost population. Florida and Rhode Island are facing similar pressures.

Despite slowing migration, the South and West continued to account for the most growth from 2007 to 2008.

Raleigh-Cary, N.C., and Austin-Round Rock, Texas, were the nation's fastest-growing metro areas, registering growth rates of 4.3 percent and 3.8 percent, respectively. Both high-tech centers, the two metros are also sites of major college campuses that helped cushion them from the housing slowdown.

-Metros registering the biggest numerical gains were Dallas-Fort Worth and Houston. Despite housing slowdowns in 2008, Phoenix and Atlanta ranked third and fourth in growth, respectively, followed by Los Angeles.

-The Washington, D.C., region was among the top 10 numerical gainers, due partly to federal government jobs. Far-flung D.C. exurbs such as Virginia's Loudoun and Prince William counties had flat or declining growth rates, victims of the housing bubble and a spike in gasoline prices.

The census estimates used local records of births and deaths, Internal Revenue Service records of people moving within the United States, and census statistics on immigrants. The estimates were for both counties and metropolitan areas, which generally include cities and surrounding suburbs.