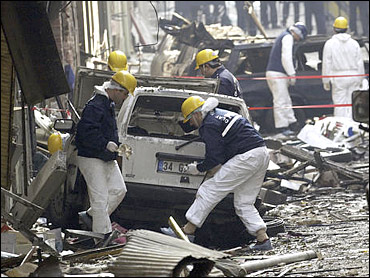 The explosive of choice in several of the most spectacular terrorist bombings around the world — from Istanbul to Bali to Oklahoma City — doesn't take an army of weapons inspectors to detect.

It's cheap farm fertilizer that's tightly restricted in Europe but easily available in the United States and elsewhere, despite U.S. warnings after the train bombings in Madrid, Spain, that terrorists might use ammonium nitrate explosives to strike public transportation.

On Thursday, Turkey becomes the latest country to join the European Union in regulating sales of ammonium nitrate which, when mixed with diesel fuel, forms an explosive with more than half the force of dynamite.

It takes very little expertise to make a bomb out of the fertilizer, yet efforts to regulate it conflict in many countries with the desire of farmers for easy access to cheap ammonium nitrate for their fields.

"Farmers can buy this over the counter by the sackful," said retired Indian police Col. Mahendra Choudhary. "It's difficult, just impossible, to stop this sale because it's used for fertilizers."

In Thailand, the theft of 1.54 tons of ammonium nitrate from a poorly guarded quarry on March 30 has raised fears of attacks by Islamic insurgents in the country's south with improvised bombs.

"Even kindergarten children can make one if shown how," said Lt. Gen. Pisarn Wattanawongkiri, commander of the army in southern Thailand.

In the American farming state of Iowa, officials have warned dealers to be on the lookout for suspicious purchases and thefts of ammonium nitrate.

"We've notified the people that handle this stuff that it's used to make bombs," said Terry Jensen, chief of the Iowa Department of Agriculture's fertilizer bureau. He added, however, that there has been no talk of further regulating sales or production in the United States.

The United States and many other countries haven't restricted production or import of the fertilizer largely to avoid angering farmers.

Concern remains high, however. U.S. authorities earlier this month warned that terrorists might strike public transportation and said they feared that ammonium nitrate explosives could be used.

The March 11 bombings of four commuter trains in Madrid were carried out with dynamite, however, killing 191 people and injuring 1,800 others.

Kathy Mathers, spokeswoman for the Washington-based Fertilizer Institute, said the industry has been on heightened alert since the Oklahoma City bombing in 1995 and the Sept. 11, 2001, attacks. "The industry remains on high alert to ensure our products stay in the right hands," Mathers said.

Officials from the Fertilizer Institute, a private lobbying group, and the U.S. Bureau of Alcohol, Tobacco and Firearms met earlier this month in Washington to exchange security information.

Ammonium nitrate bombs were commonly used by the Irish Republican Army in the 1970s, leading to the move across Europe to restrict sales.

The European Economic Community — predecessor of the European Union — began to regulate production of ammonium nitrate fertilizer in 1980.

EU rules require that ammonium nitrate fertilizers with more than 28 percent nitrogen be produced with large, dense granules to prevent them from absorbing diesel fuel — the explosive mix that has killed hundreds of people.

Effective Thursday, Turkey will ban the import of all fertilizers that do not meet those requirements. For now, the fertilizer remains cheap with about 2,200 pounds costing $220 in Turkey.

Turkish importers are planning to mix lime into the fertilizer to cut its concentration of nitrogen and make it safer. Reducing the nitrogen content, however, undermines its value as a fertilizer.

The Turkish ban came about after a series of fertilizer bombs in November left 62 dead in Istanbul in attacks on two synagogues, the British consulate and the London-based HSBC Bank. The blasts were blamed on a local al Qaeda cell. Each of the four pickup trucks used was packed with an estimated 5,060 pounds of fertilizer bombs.

The April 1995 bombing of the federal building in Oklahoma City, which killed 168 people, involved the use of a truck bomb with an estimated 4,800 pounds of ammonium nitrate fertilizer.

Investigators estimate the October 2002 nightclub bombings that killed 202 people in Bali, Indonesia, used up to 220 pounds of fertilizer-based explosives.

In the wake of that bombing, which killed many Australia citizens, Australia will issue licenses to limit access to the fertilizer, the country's attorney general, Philip Ruddock, announced on April 1.

A global ban on ammonium nitrate fertilizers is not realistic, especially with farmers balking at the latest EU restrictions. Mining and construction firms also use ammonium nitrate-based explosives. Fishermen in Indonesia and the Philippines use it to stun fish.

Meanwhile, militant groups are trying to get around EU restrictions. The Irish Republican Army in Northern Ireland has already discovered that commercial coffee grinders can be used to break up the large granules that are now found in EU-approved ammonium nitrate.

And the industry is trying to stymie the bombers. Now Speciality Fertilizer Products, a firm based in Belton, Missouri, has developed a water-soluble coating designed to repel diesel fuel that dissolves rapidly once the fertilizer is placed on soil, said Andy Oppenheimer, a nuclear, biological and chemical expert for Jane's Information Group in London.

Still, he said, "the resourceful terrorist will always find a way to use chemistry to reverse the process."