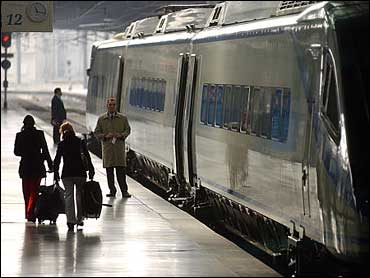 An Islamic group that claims responsibility for the Madrid bombings says it will turn Spain "into an inferno" unless the country halts its support for the United States and withdraws its troops from Iraq and Afghanistan.

The threat came in a letter faxed to the Spanish daily newspaper ABC over the weekend, the paper said Monday. ABC said the letter was handwritten in Arabic and signed "Abu Dujana Al Afgani, Ansar Group, al Qaeda in Europe."

The same person claimed responsibility for the March 11 bombings in a videotape found outside a Madrid mosque two days after the attacks.

The fax came just hours before five terror suspects blew themselves up in an apartment in Leganes, south of Madrid, to avoid police capture.

The government believes the suicide blast killed two of the alleged ringleaders of last month's Madrid train bombings, including one known as "the Tunisian," and three other terror suspects.

Two or three suspects may have escaped before the blast, which also killed a special forces officer and wounded 15 other policeman.

The letter gave Spain until Sunday, April 4, to fulfill its demands of ending support for the United States and withdrawing troops from both countries.

"If these demands are not met, we will declare war on you and … convert your country into an inferno and your blood will flow like rivers," the letter said.

The group said it had showed its force with the "blessed attacks of March 11" and the planting of a bomb along the high-speed railway line linking Madrid and the Seville last week, which did not explode.

ABC cited unidentified sources in Spain's National Intelligence Center as saying the letter's authenticity appeared "fairly credible." It said the language used in the letter was similar to that used in the video.

The intelligence agency has linked the Ansar group to the Tunisian ringleader killed in the suicide blast Saturday evening.

The United States has blamed al-Zarqawi for orchestrating many recent terrorist attacks in Iraq, but militants themselves claim he is dead.

The railway bombings, which killed 191 persons and injured some 1,800, came three days before Spain's general elections. Many saw the bombings as a reprisal for the Spanish government's support for the U.S.-led invasion of Iraq.

The opposition Socialist party, which had opposed the war along with most Spaniards, won the elections, in part due to anger over the attacks.

In one of its first statements, the party said it planned to withdraw Spanish troops from Iraq by June 30 unless the United Nations took control of the situation there. The party later said it intended doubling its troop numbers in Afghanistan to 250 to show it was committed to fighting terrorism.

In France, where a shadowy group has threatened attacks on the rail system and at least one large bomb has been discovered on the tracks, the Interior Ministry says 13 people detained after a raid this weekend are suspected of belonging to the Moroccan Islamic Combatant Group, which is alleged to have al Qaeda links. The group has been mentioned in the investigation into last month's train bombings in Spain.

The Moroccan Islamic Combatant Group, which has links to al Qaeda, is related to a group suspected in last year's Casablanca bombings, which killed 45 people including 12 suicide bombers.

Fifteen Madrid bombing suspects are already in custody. Six have been charged with mass murder and nine with collaborating with or belonging to a terrorist organization. Eleven of the 15 charged are Moroccan.